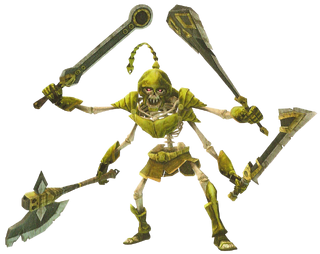 Initially, Stalmasters only uses two of their arms in combat, wielding two swords much in the same fashion of a regular Stalfos. After taking a certain amount of damage, it unfolds its two other arms, which also hold weapons. The full arsenal of the Stalmaster is three swords and an ax. In this four-armed phase, the Stalmaster will generally position its swords so that it can only be struck from one direction at a time. The Stalmaster is very aggressive while in its four-armed phase, often striking with all four arms in quick succession. It has a strong charging attack where it first guards itself with all four weapons, then lunges forward and swings them outward. Like the regular Stalfos, the Stalmaster gradually loses portions of its rib cage as it takes damage. When it is close to defeat, its helmet falls off and spawns Hearts.

Stalmasters appear in Hyrule Warriors as Captains rather than as a mini-boss. Their attack patterns are similar to that of Darknuts, as their eyes will glow red before lunging forward to strike with their swords. Doing so also leaves them vulnerable and exposes their Weak Point Gauge. As with Darknuts, they are also weak to the Boomerang when charging their flurry attack, as well as having their Weak Point Gauge revealed if the Warrior fighting them dodges behind them. When defeated, they may drop Stalmaster Wrist Bones or Stalmaster's Skulls. Due to being based on Darknuts, Stalmasters use a shield in place in place of their second sword and have their secondary pair of arms tucked in.

In Hyrule Warriors Legends, Dark Stalmasters appear as Sealed Troops on the final mission of the "Liberation of the Triforce" Scenario. They are summoned by Ganon once Princess Zelda gives the power of the Light Arrows to her allies. They are used in an attempt to weaken the Light Arrows' power.