Not to be confused with Fossil Stallord, a similarly named Boss from Link's Crossbow Training. 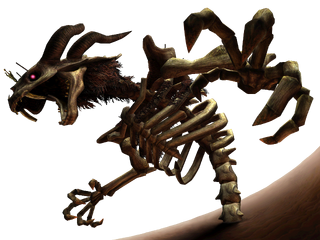 Originally, Stallord is a lifeless skeleton of an ancient beast found in the dungeon's final chamber. Zant, however, reanimates Stallord's fossil by plunging the Scimitar of Twilight into the skull, thereafter disappearing.

Stallord awakens and a large sand pit forms all around it. Link is forced to attach himself to the edge of the pit with the Spinner and ride around it. He must then detach from the wall and direct himself towards the spine, attempting to dodge the Staltroops that attempt to block his attacks. Successfully attacking the spine three times makes it crack, bringing Stallord down. After this, its head falls to the ground, draining the sand out of the room. By spinning the Spinner into the lock in the center of the room, Link activates the gears, which causes a central pillar to rise in the middle of the room, leading to the second part of the battle.

Stallord's skull then flies around the raised pillar, attempting to bombard Link with fireballs. Only by riding along the wall with the Spinner is Link able to catch up with it. Stallord attacks whenever Link gets close enough, forcing him to jump from wall to wall to evade. By striking it with the Spinner, Stallord is knocked out of the air, giving Link the chance to attack the Scimitar in Stallord's skull. When Stallord rises again, Blade Traps start filling the walls, forcing Link to keep jumping from wall to wall.

After enough hits, Stallord is defeated, leaving behind a Heart Container.

In the Ocarina of Time manga by Akira Himekawa, a Stalfos under the name of Stallord appears as a secondary antagonist. It leads Ganondorf's Stalfos army in the attack on Hyrule Castle, eventually dueling and besting the young Link in combat.

Seven years later, after emerging from the Temple of Time, Link finds Stallord and another Stalfos attacking a Hylian Soldier. Link easily defeats the Stalfos and vanquishes Stallord after a short duel. Reduced to a disembodied skull, Stallord flies to Ganon's Castle to inform the dark lord that the Hero of Time has arrived.

Stallord is a portmanteau of "Stal", a skeletal species, and "Lord".