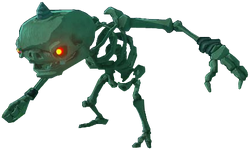 Stalkoblins are the skeletal remains of Bokoblins which emerge from the earth at night. When they emerge, they may be holding various Weapons, however, if they lack any Weapons, they will either swipe at Link if he is nearby, or dig up rocks to throw at Link. Some can also be found riding Stalhorses.

Stalkoblins are fragile and their bodies will easily collapse if struck, leaving their disembodied skulls to roll around. Shortly afterwards, their bodies will reform and run after their heads to reattach them. If a Stalkoblin's skull is present, the bodies of other Stalkoblins whose skulls have been destroyed will remain. These decapitated skeletons will simply jump and wave at the remaining intact Stalkoblins until their skulls have been detached, at which point they will attempt to take the skull for themselves. Stalkoblins will pick up the detached skulls of other Stalkoblins and throw them at Link to hurt him. If they come into contact with a flame, their entire body will catch on fire, in addition to any wooden implements they carry.

The detached arms of Stalkoblins, known as Bokoblin Arms, can be picked up by Link and used as a Weapon. While detached, it will roll towards a common point with the other bones to reform the Stalkoblin's skeleton. If taken, Bokoblin Arms will remain animate when the rest of the skeletons they belong to are destroyed.[2] When defeated, they may drop Bokoblin Fangs. Curiously, the Bokoblin Fangs will not drop from their skulls, but rather from their skeleton bodies.

Link may pick up a detached Stalkoblin head and kick it further away from its body. If it lands in water deep enough to submerge it completely, the Stalkoblin will die.

If Link wears the Bokoblin Mask, Majora's Mask, or possesses the Disguise; Bone Atk. Up Set Bonus by wearing the full Radiant Set or Phantom Ganon Set, Stalkoblins will not attack Link unless he attacks them.

Stalkoblins reappear as enemies in 'Hyrule Warriors: Age of Calamity', first appearing in Freeing Korok Forest. Like in the Breath of the Wild, they fight with various weapons against Link and his allies. Unlike Breath of the Wild, if a Stalkoblin is defeated, its head flies off and resumes the fight as a Cursed Bokoblin.