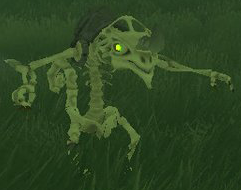 Stalizalfos are the skeletal remains of Lizalfos which emerge from the earth at night. They may have various Weapons such as Lizal Forked Boomerangs equipped, however, if they do not carry any Weapons, they will swipe their tails at Link or try to jab their tongue at him, the latter not even happening due to being undead. Like other Stal enemies, their bones are very fragile. Any attack Link dishes out will cause them to temporarily fall apart.[2] The bones rebuild themselves without the head after a short period of time and walk toward the head as the head hops and rolls to the body so that they can rejoin. If Link destroys the head before the monster rebuilds itself, it is permanently defeated and both the body and head will vanish.

If Link wears the Lizalfos Mask, Majora's Mask, or possesses the Disguise; Bone Atk. Up Set Bonus by wearing the full Radiant Set or Phantom Ganon Set, Stalizalfos will not attack Link unless he attacks them.