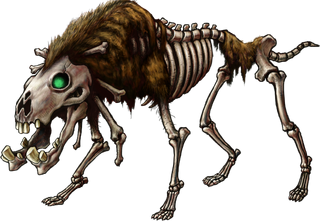 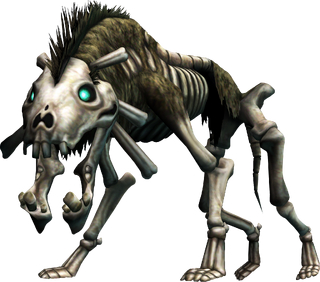 Stalhounds are skeletal dogs that emerge from the ground in various locations of Hyrule Field at night.[2][3] These creatures can be defeated with any conventional attacking weapon in Link's arsenal. However, it is easiest for Link to simply slash them with his Sword. They will generally appear in pairs.[4][5]

When Link must retrieve Ilia's memory, the Wooden Statue is stolen from Borville.[6][7] Link can use his wolf form to track down its scent to find Telma's cat, Louise. She admits that she took the statue, but that it was stolen by Stalhounds out in the field south of the Hyrule Castle Town.[2] It is here that Link must fight a horde of Stalhounds in order to rescue the stolen statue.

In the Cave of Ordeals, Stalhounds can be seen wandering around in some rooms, sometimes accompanied by other enemies. However, landing on the floor where the Stalhounds are wandering causes a much larger pack of them to emerge from the ground.