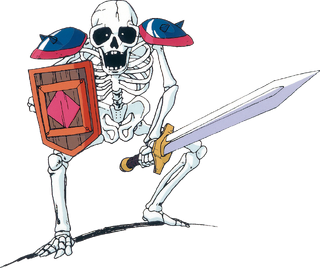 A Link to the Past (Cagiva)
Cadence of Hyrule

Bomb
Boomerang
Stalfos Knights,(ALttP | CoH)[1][2][name reference needed] also known as Skeleton Knights,(ALttP)[3] are recurring enemies and Sub-Bosses in The Legend of Zelda series. They are a variety of exceptionally large, strong Stalfos armed with large blades.

Stalfos Knights are stationed in the Ice Palace, where they drop from the ceiling in certain rooms to attack. They then proceed to leap across the room to assault Link. Attacking a Stalfos Knight with a sword will simply cause it to collapse into a heap, only to reform shortly afterwards. They commonly appear in pairs. The Stalfos Knights in A Link to the Past are the largest non-boss enemy in the game: they are about four times the size of a regular Stalfos and tower over Link.

Stalfos Knights also appear in the Palace of the Four Sword of the Game Boy Advance release. These knights are a red color compared to those in the Ice Palace, but they are the same strength.