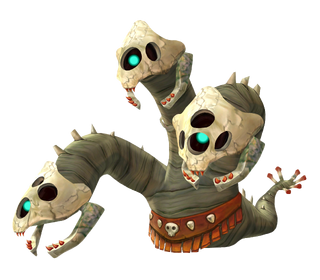 Staldra are skeletal hydras located in the Skyview Temple and Lanayru Mining Facility. They are able to regenerate their heads when one is cut off.

Upon encountering an enemy, Staldras will begin moving their heads in various patterns as they confront them, before lunging at their foes in attack. Their heads will align themselves in a horizontal, diagonal, or an uneven position. Link can only defeat them by destroying all three heads at once, otherwise the decapitated heads will quickly regenerate. Because of this, they can only be defeated when they align their heads in an even position where Link can slice through all three at once.

An easy way to defeat Staldras is to Shield Bash them when they lunge, then attack while they are stunned. It is possible to kill Staldras with Bombs if all the heads are looking in the direction of the Bomb. Upon defeat, Staldras will drop a single Red Rupee.

Staldra is a portmanteau of "Stal", a prefix used to denote skeletal creatures such as the Stalfos, and Hydra, a multi-headed serpent-like beast from Greek myth that could regrow its heads.