Zelda Wiki
Register
Don't have an account?
Sign In
Advertisement
in: Enemies, Common Enemies and Traps, Stalfos,
and 11 more 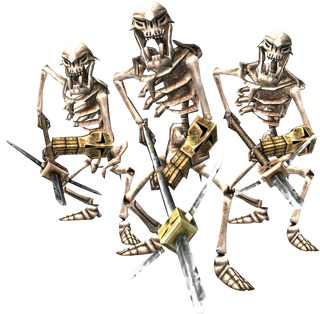 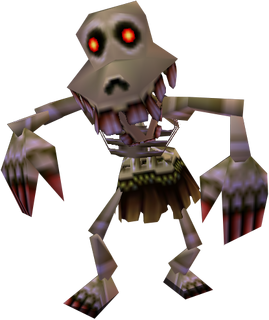 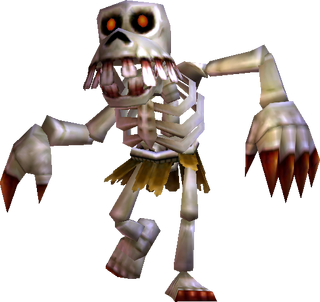 Ocarina of Time
Claw Slash (1/4 Heart)
Stalchildren are recurring Enemies in The Legend of Zelda series.[3][note 1]

Stalchildren appear in Hyrule Field in Ocarina of Time. They spawn only at night while Link is a child and disappear at sunrise. They will not appear if Link is wearing the Bunny Hood or if he walks on the Road. Stalchildren attack in pairs, and if one falls before the other, another Stalchild may spawn in its place if Link takes too long to destroy the other. Each time 10 Stalchildren are defeated, a larger one will spawn alongside a regular sized Stalchild. Stalchildren can be defeated with two hits, regardless of size. If Link attacks a Stalchild from the front, it will lose its head and begin wandering around blindly.

Stalchildren are of the Ikana race in Majora's Mask. They haunt the Ikana Graveyard and are the fallen soldiers of the Ikana Kingdom.[5] Their general is Captain Keeta, but they will mistake anyone that wears the Captain's Hat for their leader.[6] By wearing the Captain's Hat, the Stalchildren will ask Link whether they should open or guard the grave, mentioning that they already had an order from Captain Keeta to guard it.[7] In the Oceanside Spider House, Stalchildren will reveal the solution to the house's puzzle, ultimately leading to a Piece of Heart.[8]

Stalchildren appear in various stages in Four Swords. They attack by throwing their bones at the Links. Their movement is slow but they are able to leap out of the way of attacks, and commonly appear in small groups.

Stalchildren appear in the Arbiter's Grounds and the Cave of Ordeals in Twilight Princess. They emerge from the ground in large groups and attack with small spears. They can be destroyed with almost any weapon, though Link's Sword is the most effective, especially when the Spin Attack is utilized.

A Stalchild makes a brief appearance in The Legend of Zelda: Ocarina of Time (Himekawa), being burned to a crisp by a young Volvagia before it became a follower of Ganondorf.

Stalchildern appear in The Legend of Zelda Zone, attacking Sonic by slowly wandering toward him. They can easily be defeated by any of his moves, such as the Homing Attack.

Stalchildren appear as foot soldiers that group in large numbers in Hyrule Warriors. In Legend Mode, they appear in the Scenarios "The Sheikah Tribesman", "The Water Temple", "Liberation of the Triforce", and "Darkness Falls".

Helmeted Stalchildren with broken armor appear in occupied Keeps and Outposts. Summoner Stalchildren also appear as a variant that summons reinforcements, and wear purple hoods and carry staves. Unit troops are led by Stalchild Captains, which are actually Stalfos in appearance. The same type of Captain also appears as a Keep Boss variant that guards Keeps and Outposts. Stalchild Captains occasionally drop the Monster Tooth Bronze Material when defeated.