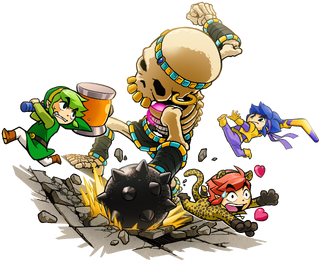 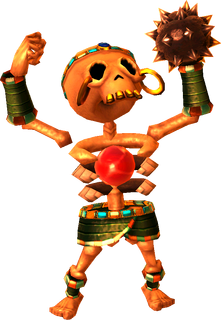 Stalchampion is the boss of the Desert Temple in Tri Force Heroes. It is a giant Stalfos warrior.

Stalchampion is fought on a stone platform in the center of desert quicksand. Its left arm is a large mace that it uses to attack the Links with by powerfully slamming it onto the ground. Its weak spot is the heart-like core inside its rib cage, however it cannot be attacked directly. To fight it, the Links must first stun it by hitting its vulnerable backside using either the Sword or the Boomerang. This will stun the boss as it humorously hops around while holding its foot in pain. The Links can then attack it during this state using either the Sword or Boomerang, causing it to come crashing down and fall apart. Its red core then becomes vulnerable to the Magic Hammer. While attacking it, the Links must be careful of the mace that will roll towards them. One of the Links can lure it away, so the others can continue attacking. Eventually Stalchampion will reemerge and launch itself into the air, creating a shock wave as it lands that will send the Links flying if they are caught in it. Its shock waves will grow larger the more it is weakened.

As the Links continue to attack the boss, it will start to adapt its strategy by throwing one of its ribs as a boomerang, and swing its mace more aggressively. Eventually, after inflicting enough damage, it will become enraged and the shock waves it creates as it lands will take up the entire platform. The Links can avoid this by stepping outside of the area just before it lands. When Stalchampion has taken enough hits, it will leave its battered body behind as a floating skull. The head will attempt to dive and chase after the Links. The mace will also continue to roll after the Links should they move close to it. While the head is chasing a Link, it can be stunned with the Boomerang, allowing the Links to gang up and strike it. One Link can lure the skull away, allowing another to strike it with the Boomerang from afar. After several more hits, it will be defeated.