This article is about the game mechanic featuring areas and Dungeons. For a similar game mechanic, see Level. 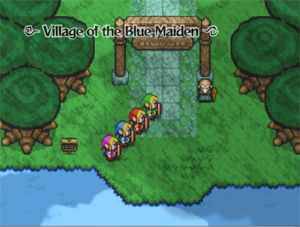 The Faces of Evil
The Wand of Gamelon
Link's Crossbow Training

Level
Stages are recurring mechanics that feature locations that may double as Dungeons in The Legend of Zelda series.[1][2][3][4][name reference needed]

In Four Swords Adventures, Levels refer to chapters that contain three Stages each.

In Tri Force Heroes, each of the 32 Levels consists of five self-contained Stages. The Links select their Items from a trio of pedestals at the beginning of the first Stage and keep them through the entire Level, Warping to subsequent Stages via Triforce Gateway found at the end each Stage. Only in the final Level, Sky Temple, are the Links given the opportunity to select new Items in the second and third Stages.

In the second Stage of each Level, a battle against multiple Enemies takes place. The Triforce Gateway will only become activated once all Enemies are defeated. The fourth Stage of each Level contains either another such battle, a Mini-Boss, or a Boss.

The fifth Stage is a safe room containing three Treasure Chests with Materials inside; one of the Materials being more valuable than the others. The Links cannot take damage in this Stage, and the Level concludes once each Link has opened a Chest, or after approximately 30 seconds has passed.

In the single-player mode, any of the Stages can be skipped by pressing a "Skip" button on the lower screen, at the cost of one Fairy and all of the Rupees collected thus far. If any Stages are skipped, some or all of the Treasure Chests in the fifth Stage will have their Materials replaced with Red Rupees, and the Level will not count as "completed" for the single-player mode.

In Link's Crossbow Training, each Level contains three Stages.[5] In each Stage, Link finds himself in a different area of Kingdom of Hyrule where they have to either shoot Targets, defeat advancing Enemies, or travel through a location defeating a number of Enemies. These three types of Stages are respectively named Target Shooting, Defender, and Ranger Stages.[6] In every stage, every Target or Enemy can be shot to gain a certain amount of points, but every Stage has a time limit of 60 seconds.[7][8] At the end of the Level, all of the obtained points from each of the three Stages are tallied up.[9] If Link obtained 20,000 points or more, he earns a Bronze Medal; he earns a Silver Medal for 40,000 or more points; he earns a Gold Medal for 60,000 or more points; he earns a Platinum Medal for 80,000 or more points. In order to unlock the next Level, Link must earn at least a Bronze Medal.[10]