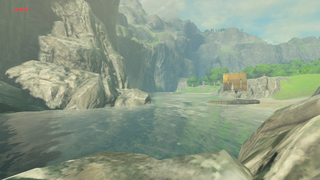 The Squabble River is a location in Breath of the Wild.[1]

The Squabble River is a lengthy river that stretches across the Necluda Region, beginning at some point where the Fir River meets the Cliffs of Quince, continuing until it confluences with the Hylia River just before the Proxim Bridge. The Squabble River passes under both Big Twin Bridge and Little Twin Bridge and through the Dueling Peaks, where it surrounds the Dueling Peaks Tower.

Many enemy encampments can be found along the banks of the River, comprised mainly of Bokoblins. Keese and Stalkoblins will also spawn at night along the riverbank. In Hickaly Woods in a section of land south of the last bend in the Squabble River, a Stalnox will form at night.

Many Treasure Chests are hidden along the riverbank and within the River itself. From west to east, the first Chest is underwater where the River meets Hylia River. Inside is an Amber. There is a Boomerang within the ruins on the north side of the River. The next two Chests are guarded by camps of Bokoblins and both contain Opals. There is an Amber, a Purple Rupee, and a Soldier's Spear within Chests that can be found inside the rocks circling Dueling Peaks Tower. There is also another Amber underwater in the northern section of the River surrounding the Tower. In Master Mode, there is a Sky Platform floating to the east of the Dueling Peaks Tower that holds a Chest containing a Shield of the Mind's Eye. Within the cliff face of the Dueling Peaks facing the river, there are two Chests that contain a Traveler's Bow and a Boomerang. There is an Opal under Big Twin Bridge, and in Master Mode, there are Sky Platforms over both bridges that contain a Soldier's Spear and a Soldier's Claymore. In addition, there are ten Arrows in a Chest in the northern section of Hickaly Woods.

There is a Korok that can be found south of the Dueling Peaks Tower. Link must touch a yellow flower and follow the flower and touch it as it continually pops up across the River from stone to stone. Once Link follows the flower to the other side of the River, it becomes white and touching it causes a Korok to appear give Link its Korok Seed.