Zelda Wiki
Register
Don't have an account?
Sign In
Advertisement
in: Swamps, Locations, Locations in Oracle of Seasons
English 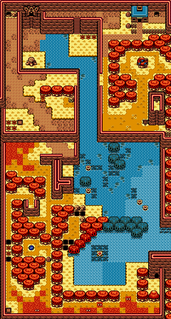 Spool Swamp as seen in autumn

Spool Swamp contains a Portal to Subrosia, a Piece of Heart, a Tree Stump, a Pegasus Seed Tree, two Gasha Seed spots, and a few caves. In a non-Linked Game, the Square Jewel is located in one of the caves; in a Linked Game, a chest with 100 Rupees appears instead. Due to the aquatic nature of this area, enemies like Tektites and Goponga Flowers are drawn to Spool Swamp at various times of the year, before the icy chill of winter causes them to migrate and/or hibernate. In winter, Octoroks appear in the areas where the water freezes over. In spring, the swamp becomes more filled with water than in other seasons (probably from rains or snowmelt) and rapids form in the southern portion; the Piece of Heart is surrounded by reeds that are only passable when the rapids are running over them. In summer, Goponga Flowers become more populous and the Golden Octorok appears.

There is a local floodgate where a Floodgate Keeper controls the water level of the swamp. The floodgate can be opened with the Floodgate Key, found in his house.