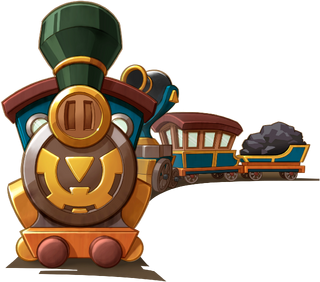 Epona
SS Linebeck
King of Red Lions
Crimson Loftwing
Tinliner
The Spirit Train,(ST | HW)[1][name reference needed] also known as the Spirits' Train,(ST)[2] is a recurring Item and Object in The Legend of Zelda series. Since the Spirit Train is considered to be a symbol of the Spirits of Good, it bears the Symbol of the Spirits, a Force Gem on top of a pedestal, at the front of the train. The ancient locomotive is esteemed and known for having a "long history of keeping evil at bay."[3][4]

Prior to the events of Spirit Tracks, the Spirits of Good entrusted the Spirit Train to the Lokomos with its keeping, where it was turned to stone and placed in the center of the Tower of Spirits.[5] After Link and Princess Zelda retrieve the Forest Rail Map from atop the tower, Anjean, one of the Lokomos, charges the young duo with the task of restoring all of the Spirit Tracks that have begun to disappear throughout the four Realms.[6] To do so, however, she lends the Spirit Train to Link and Zelda so that they may easily travel between the realms. Anjean explains that the Spirit Train is not normally used by people, but under the special circumstances that the kingdom of Hyrule is currently facing, there is no other choice than to let them use it.[4]

Like the SS Linebeck from Phantom Hourglass, the Spirit Train is controlled by drawing its path on the bottom screen of the Nintendo DS. Speed is selectable by use of a gear to slow, speed up, and/or change directions. A whistle is employed to clear the tracks of wayward animals, and like Link's other transportation vehicles, the Spirit Train has an on-board Cannon. At first, however, the Spirit Train only comes with the engine and the passenger car. After Link and Zelda retrieve the Snow Rail Map, Bullbos begin to roam the land and, as such, Link's mentor Alfonzo aids them in their quest by adding the cannon to the Spirit Train. Moreover, Kagoron of Goron Village provides the young hero with a Freight Car after he asks that Link bring Mega Ice in order to cool down the lava that has been recently flowing through the village.

While in the overworld, the Spirit Train's endurance meter appears as green Hearts at the top of the screen. Stopping at a Train Station replenishes any Hearts lost during the travel. More Hearts can be obtained for the health meter by choosing the right combination of Train Parts (see below).

As Link is driving the Spirit Train around the overworld, he will have to carefully pick what Spirit Tracks to go on since Dark Trains will also be roaming the tracks. If a Dark Train is approaching Link, the young hero can shoot Bombs at it to slow it down, giving him a chance to escape; however, if he doesn't, the Train will crash into him, resulting in a game over. Eventually, Armored Trains will also start appearing in the overworld, which are faster, smarter versions of the Dark Trains. Link cannot hurt these Trains with the Bombs, and they can also change their course in a matter of seconds if they spot Link's Spirit Train riding on the same area that they are roaming.

Inside the Dark Realm, the Spirit Train becomes an even more vital part to the game since it is the only way to reach the Demon Train. Here, Link must use the various Tears of Light scattered throughout the realm to power up the Train and thus give it invincibility for a while in order to destroy the various Armored Trains that are roaming the tracks.[7] Link can blow the whistle to make the Spirit Train go even faster while it is being powered by the Tears of Light. After all of the Armored Trains are defeated, Link and Zelda will proceed to face off the Demon Train, which is defeated by using the Spirit Train's cannon and Bombs.

The Train is customizable, and the special add-on Train Cars can be found at Linebeck III's Trading Post, located in the Forest Realm. There, Link can trade in the Treasures he has accumulated for Train Cars.[8] Each piece requires specific amounts of various treasures before Linebeck III will turn one over. Once Link has obtained new Train Cars, he can ask Alfonzo in Aboda Village to switch them out as needed. Just like the Ship Parts in Phantom Hourglass, if these parts are added to the Spirit Train, the Train will gain a longer life meter, allowing it to take more hits from the numerous enemies Link will encounter in his travel. Stacking multiple Train Cars from the same series will multiply the amount of health in the Train's health meter. For example, any random combination of parts or the regular set gives the Train a defense of five Hearts. By customizing the Train with a complete set, it will increase the defense of the Train to six Hearts. Equipping it with the full Golden Train set gives it a defense of eight Hearts.

During Link's adventure, the Spirit Train becomes his main mean of transportation around the kingdom of Hyrule, and as such, it is the only way to access the various Train Stations as well as Beedle's Air Shop. Being a Royal Engineer, he is sometimes tasked with giving other people rides to Train Stations, which sometimes results in the young hero receiving a Force Gem as a sign of gratitude.[9] As he is riding the Train with a passenger aboard, Link must pay attention to the signs that have been placed all over the Spirit Tracks. These signs demonstrate when Link should slow down or speed up, as well as when he should blow the Train's whistle. Moreover, he must stop exactly at the Train Station that the passenger wishes to go to, so if he the young hero passes the stop sign at the station, this will also displease the passenger. Failing to do what the signs say (or suddenly using the emergency break) will result in the passenger being displeased on how he drives the Spirit Train.[10] If the young hero keeps making mistakes, the passenger will become angered and leave the train, at which point Link can either go back and try again or keep going.[11][12]

The Spirit Train appears as a stage in Super Smash Bros. for Nintendo 3DS. The stage features the Spirit Train moving across New Hyrule. The main platforms are three Train Cars: the Spirit Engine, the Solid Passenger Car (which has open windows and two open walls) and the Trusty Freight Car, which often changes cargo. Dark Trains and Armored Trains occasionally appear on the tracks and may ram into the train, which slows it down and pushes it towards the edge of the screen. The Dark and Armored Trains can also fall on the train and explode, after which only the Spirit Engine is left behind. Platforms carried by birds also appear above the train sometimes. Link in his Engineer's Clothes makes a cameo appearance driving the Train. If Toon Link or Link are chosen as fighters on the stage, Link is replaced by Alfonzo as the train driver.

The following lists the music that appears in the Spirit Train stage.