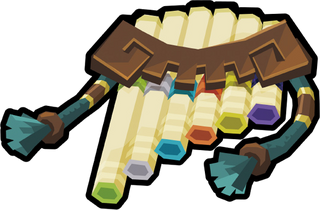 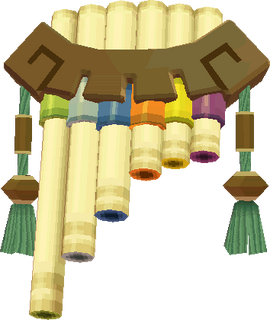 The Spirit Flute,[1] also known as the Spirit Pipes,[2] is an item resembling a Pan Flute found in Spirit Tracks, and the instrument Link uses in the game to play music. It is one of the sacred instruments of the Lokomos, which originally belonged to Anjean before she entrusted it to Tetra.[3]

It is stated by Anjean she entrusted the Spirit Flute to Tetra long ago when the feisty pirate captain first arrived on the shores of the land.[4] Tetra promised that she and her descendants would use the Spirit Flute to protect the land, as she was the heir to the ancient royal line of Hyrule that would come to rule over the land.[3] For many years, Tetra and Anjean carried on a close friendship, and Tetra would often play the Spirit Flute for her granddaughter, the reigning Princess Zelda at the time of Spirit Tracks, when she felt troubled or worried.[5] Upon meeting the reigning Princess Zelda, Anjean notes the many similarities between the princess and her grandmother, as well as instructing she and Link to keep the Spirit Flute with them as it will aid them in restoring the Spirit Tracks.[6]

To play the Spirit Flute, the touch screen of the Nintendo DS must be tapped to slide the instrument over so that the desired note is in the middle of the screen. Afterward, air must be blown into the microphone to play the note.

Link can learn a total of five songs, all of which are taught by Air Stones scattered throughout the various villages and sanctuaries in Hyrule. All of the following songs are recorded in Link's inventory, with the exception of the Lokomo Songs, which only function when the young hero is playing along with another Lokomo.

Throughout Link's quest, he will find members of the Lokomo tribe who will teach him a special melody known as a Lokomo Duet that he can play on the Spirit Flute. Playing the song along with the Lokomo member and his sacred instrument energizes the Rail Map, which in turn restores portions of the Spirit Tracks leading from the sanctuaries to the temples.[7][8]