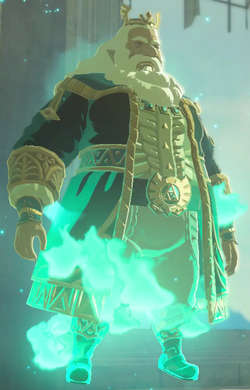 King Rhoam's Spirit in Breath of the Wild

Super Smash Bros. Ultimate
Spirits are metaphysical entities without a corporeal body, often times the form taken by the deceased in the afterlife, and are a recurring concept throughout The Legend of Zelda series.[1][2][citation needed]

Spirits make their first appearance in Majora's Mask. Inhabitants of Termina who have passed away may live on as a Spirit if their will is strong enough, although they can only be seen by the living with the Lens of Truth.[citation needed] Many Spirits with troubles and lingering regrets wander at Ikana Hill.[3] Spider Tokens contain the Spirits of the spiders that must be slain to obtain them.[4] Some Masks that Link can collect contain the Spirits of deceased characters. The Goron Mask contains the spirit of Darmani III and the Zora Mask contains the spirit of Mikau.[5][6] All four boss Remains imprison an innocent Spirit within that Link frees after defeating each Boss.[7][8][9][10]

The Old Men found in Caves and Dungeons appear in the form of spirits who assist the four Links by giving them cryptic hints.

During the events of Twilight Princess living inhabitants of Hyrule are transformed into spirits under the influence of the Twilight.[11] Soldier spirits can be a glowing flame floating in the air, which are currently alive soldiers. In contrast, there are spirits (possibly not even spirits, just ghosts) in Hyrule Castle, which do not appear in Twilight and look undead. They have red, long hair, glowing eyes, and the same armor as their live counterparts. These are actually very helpful, because if wolf uses his senses, he will see them pointing to someplace. The pointing helps in making the right decision, right footing, and puzzle solving. Not all are transformed into spirits within the Twilight; it is believed that its effects are partially negated by the protection of the Triforce. Ganondorf becomes a horned, yellow, glowing head, similar to a skull, as shown in a cutscene where Zant talks in the Palace of Twilight. Link becomes a wolf (strangely not transforming in the Palace of Twilight), whereas Princess Zelda remains in her true form. The Twili also remain in their true form due to them naturally inhabiting the Twilight Realm.

There are also Light Spirits. Three of the four have a reference to the Golden Goddesses, Nayru, Din, and Farore. For example, the Lanayru Province is named after the Goddess of Wisdom, Nayru.

In Breath of the Wild, the four Champions and King Rhoam were killed in the Great Calamity and appear 100 years later as Spirits. Other Spirits include the Lord of the Mountain and the three Dragons known as Farosh, Dinraal, and Naydra.

Spirits are the manifestations of characters who have lost their physical forms in the imaginative world of Super Smash Bros. Ultimate. Despite this, many Spirits have retained their innate qualities, such as Medli retaining an immunity to Strong Wind. Spirits replace Trophies from previous Super Smash Bros. titles.

Spirits can be acquired by winning Spirit Battles, which are listed on the Spirit Board. In Spirit Battles, Spirits are paired with complementary Fighters based on shared personality, appearance, or other qualities. Spirits can also be obtained by exchanging gold at the Shop.

Defeating Master Spirits unlocks various facilities, such as the Gym and the Dojo. At the Gym, which is operated by Doc Louis, Primary Spirits can be left to gain experience as time passes. Similarly, the Dojo is operated by various characters and is where Spirits can learn new Styles. Spirits can also be sent on Expeditions to areas such as the Ruins, the Caves, and the Jungle in search of treasure which they will collect over a set period of time under Toadette's direction.

Spirits can be sent back to the "real world", causing them to disappear from the collection. In exchange, they leave behind Cores, which can be assembled to Summon other Spirits at the cost of those respective Cores and SP. Similarly, amiibo Figure Players can Inherit stats and skills from both Primary and Support Spirits, though this consumes the Spirit.