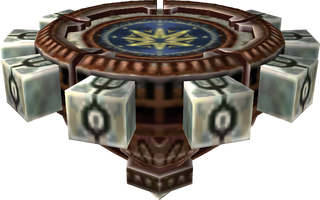 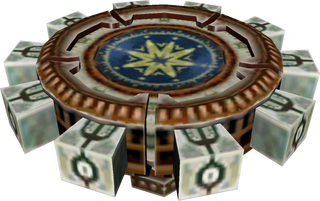 Traveling along rails and quicksand
The Spinner is recurring item in The Legend of Zelda series.[citation needed]

The Spinner is found in the Arbiter's Grounds after defeating Death Sword. As the main dungeon item, it must be used in order to progress through the second half of the dungeon. It is also necessary to defeat the dungeon's boss, Stallord.

The Spinner is an ancient item created long ago. Link rides it much like a skateboard, except he can only ride on it for a few seconds until the Spinner loses its momentum. The device can also be attached to railings located on specific walls that allow Link to travel along them. It is essential for fully navigating the Arbiter's Grounds as it allows Link to drift across quicksand without sinking. The Spinner also features a spin attack that Link can use to hurt nearby enemies. Additionally, if Link uses the Spinner before falling or jumping off a high cliff, he will be slowed down considerably and take no damage upon landing. He can also control his descent as he falls.

The Spinner is also used to unlock the Mirror of Twilight from within the Mirror Chamber after reaching the roof of the dungeon. After Link leaves the Arbiter's Grounds, it is used in the City in the Sky and Hyrule Castle. In those dungeons, Link finds more mechanisms which must be operated using the Spinner. It can also be used to safely move over tiles which otherwise fall away soon after being stepped on. The Spinner can also be used to obtain Pieces of Heart and Treasure Chests hidden in Hyrule Field.

In Super Smash Bros. Brawl, the Spinner appears as a Sticker. 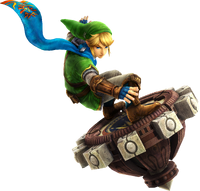 The Weapon has Link ride a form of the Spinner into battle, allowing him to strike enemies by spinning as he glides by. The Spinner takes a short time to build up speed, but can mow through a field of enemies easily. Unlike the Spinner from Twilight Princess, the Spinner in Hyrule Warriors does not lose momentum as it moves.

The default Spinner is the Ancient Spinner. Its appearance matches the Spinner in Twilight Princess.

The second form of the Spinner is the Enhanced Spinner, a more polished, mechanical version of the original.

The third form of the Spinner is the Triforce Spinner, an extravagantly decorated Spinner covered with inlaid gold and Triforce designs.

Link sets out two Spinners ahead of him to the right and left, then charges forward on a third, knocking the first two ahead in their respective directions and blasting lightning straight ahead. This attack hits a range directly ahead of Link.