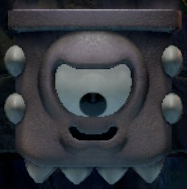 Side-scrolling areas
Dungeons
Spiked Thwomps are recurring Enemies in The Legend of Zelda series.[1] Their name and appearance comes from the Thwomp enemies of the Mario series.

Spiked Thwomps are characteristicized has having a single eye and spikes on their lower side, hence their name. Like other Thwomps, they drop down when Link approaches, attempting to crush him from above. Their top surface is flat however, and can be used as a platform to reach higher areas.

In Link's Awakening, Spiked Thwomps appear in side-scrolling areas of dungeons. They quickly drop down from a great height to crush any intruders below. This can be predicted when the Thwomp glares down below it, just before falling. After slamming down, they slowly rise up back into the air before falling again. Link can safely by-pass them by teasing the Spiked Thwomp by inching forward to initiate it to drop, then stepping back and walk by as it is slowly rises into the air. Alternately, it can also be quickly evaded by equipping and using the Pegasus Boots to run past. Unlike the normal Thwomps, only its bottom side is covered in spikes, and its top surface is flat. Link can jump on top of one as it lands by using the Roc's Feather. This becomes necessary to reach higher ledges in certain areas. Even when Link is standing on top of one, it will continue to slam down and rise, thus requiring Link to time his jumps to reach higher ledges. The enemies are completely invincible to all attacks and cannot be destroyed or stunned. They appear in Angler's Tunnel and Catfish's Maw.

In Oracle of Seasons and Oracle of Ages, Spiked Thwomps appear identically to those in Link's Awakening, but appear blue. They appear in side-scrolling areas, and drop down in an attempt to slam onto Link. As before, their top surfaces are flat and can be used to reach higher places. As the Pegasus Boots are absent, the Pegasus Seeds can be used instead to quickly run past the falling Thwomps. They appear in the Wing Dungeon in Oracle of Ages, and Snake's Remains in Oracle of Seasons.