Zelda Wiki
Register
Don't have an account?
Sign In
Advertisement
in: Waterfalls, Locations, Locations in The Faces of Evil 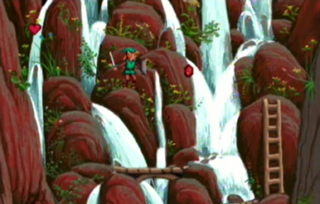 Spearfish Falls is a location in The Faces of Evil.[1] It is unlocked after completing Crater Cove.

Spearfish Falls is a large waterfall in eastern Koridai. The waterfall falls from the Face of Militron above, eventually reaching the sea near Crater Cove. The area is inhabited by a large number of Spearfish, from which the Falls gets its name. It is also the location of Koridai's Fairy Fountain, where a pair of Fairies live.

Immediately to the west of the waterfall's base is Crater Cove's volcano, where Link advances to the Falls. A small Raft near the volcano takes Link inside a flooded tunnel, where a small waterfall at the end continuously fills the tunnel. Beyond it is an opening blocked by a boulder, which is destroyed with 10 Bombs. This opening leads to the main Falls outside, where water from high above cascades down the mountain's side. Flying Spearfish jump out of the Falls relentlessly to attack Link. Further up the Falls is a small grove, where Koridai's Fairy Fountain lies. The Fairies inside proclaim Link as their hero, and give him a Life Heart and Water of Life. If Link has a Canteen, they will refill it for him as well.

Link continues to scale the rest of the Falls, again confronted by Spearfish along the way. Near the top is a blue bridge leading to a dark cavern, inhabited by a Gleeok guarding a horde of treasure. After it is defeated, it drops the Necklace, which was stolen from Alora of Toyku Lighthouse. Further up the Falls is a locked door to another cave, whose Key is sitting on a nearby ledge. The Crone inside the cave asks Link to bring her some Grapple Berries for a trick. She uses the Berries to make Link the Power Glove. A Triforce Map in the cave takes Link back to the world map. After the stage is completed, Serigon Caves is unlocked.

Waterfalls in The Legend of Zelda series
Community content is available under GNU Free Documentation License unless otherwise noted.
Advertisement