Zelda Wiki
Register
Don't have an account?
Sign In
Advertisement
in: Enemies, Common Enemies and Traps, Soldiers,
and 5 more

Spear Throwing Soldiers,(TFH)[1] also known as Spear Soldiers,(ALBW)[1] are recurring Enemies in The Legend of Zelda series. They are a variation of the enemy Soldiers that attack with spears or tridents. Spear Soldiers come in several types; some will charge after Link with their spears, akin to the Sword Soldiers, while others may throw their spears as javelins at him instead.

The red, assault-type variety is the most common, who wear red armor and appear in the Hyrule Castle Tower, and later in the Light World once Agahnim has been defeated for the first time. They are otherwise like normal Sword Soldiers, as they will charge after Link once spotted, but can cause twice as much damage with their spears. A more basic, green-colored type appears when the Informant Woman in Kakariko Village assume Link to be a villain and call for guards. The music will change, and these Soldiers will hound Link across town relentlessly until defeated. 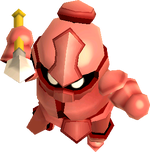 Spear Soldiers in A Link Between Worlds are strongly based on their A Link to the Past incarnation. Like other enemy Soldiers, the Spear Soldiers were originally Paintings that were painted by and brought to life by Yuga. Three varieties of Spear Soldiers appear in A Link Between Worlds. The basic type is a green Soldier that charges after Link with their trident. A similar, red-colored variety with horns attacks the same way, but is a stronger variant. The green type appears throughout Hyrule, whereas the red variety can be encountered Inside Hyrule Castle.

Javelin Soldiers also appear in A Link Between Worlds, but unlike their A Link to the Past incarnation, their armor does not possess horns. Like the Bow Soldiers, the Javelin Soldiers will maintain a distance away from Link while throwing spears at him. Link can dodge the thrown spears so he can move in close, allowing him to strike back. Link can also use his own projectile weapons, such as the Bow or Boomerang, to attack from afar. Another strategy is to dash at them with the Pegasus Boots when they are not throwing spears, allowing Link to quickly strike them before they can step away.

In the Sky Realm, a golden variety called Sky Spear Soldiers also appear, which also throw spears. This variety is much stronger than the ordinary Spear Throwing Soldiers, and take more hits to defeat.

Non-Canon Information
In chapter 4 of volume 4, Mario and Yoshi jumps into a lake that Luigi discovers, by reading a sign, it's the SNES Lake, which can take the one who dives in into diffrent SNES games. From Super Mario World, Mario ends up in A Link to the Past and gets attacked by a Spear Throwing Soldier. An angry Mario smacks him and realizes that he's now in possession of the Master Sword. After that, the Soldier doesn't reappear for the rest of the chapter.