Zelda Wiki
Register
Don't have an account?
Sign In
Advertisement
in: Enemies, Common Enemies and Traps, Blins,
and 5 more 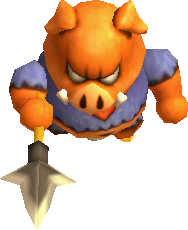 Sword
Boomerang
Spear Moblins are recurring Enemies in The Legend of Zelda series.[1][name reference needed] They are a named variant of the Moblin that uses spears to attack. Depending on the game, they may either charge at Link with their spears or throw them as javelins.

Most Moblins in the series use spears or javelins as their main choice of weapon, such as those in The Legend of Zelda, The Adventure of Link, A Link to the Past and Link's Awakening, but are necessarily called a Boarblin.

In Four Swords, Spear Moblins carry large spears with them they use to attack. They greatly resemble the Moblins of the successor game The Wind Waker, but differ as they charge at the Links with their spears rather than engage in full combat. Whenever they see one of the Links, they will sprint to gain momentum and then rush straight ahead with their spears pointed forwards. Their spears are able to parry the Links' Swords, so it is advised that they be attacked from behind. They can also be stunned with the Boomerang. Spear Moblins often appear in groups, and appear in the Sea of Trees and Vaati's Palace. In Four Swords Anniversary Edition, they also appear in the Realm of Memories and the Hero's Trial.

Spear Moblins will charge at Link with their spears when they spot him in The Minish Cap. They appear in the Western Wood, Trilby Highlands, and occasionally in Simon's Simulations. Although their Figurine claims that they can be found in Minish Woods, they do not actually appear there.

According to the Swordsman Newsletter, defeating them is a good source of income, however, this is not necessarily true.[2]

As with Four Swords, Bow Moblins also appear in The Minish Cap.

In Tri Force Heroes, Spear Throwing Moblins appear identically to the spear-wielding Moblins of A Link Between Worlds.[3] As with their previous incarnation, they carry with them spears that they throw at the Links as javelins. Spear Throwing Moblins will back away and try to maintain a distance from the Links as they aim their spears at them. They are prolific to the Woodlands region of the Drablands, appearing in the Deku Forest and Moblin Base. They also appear in the Secret Fortress and the Den of Trials. In the Moblin Base and Den of Trials, Spear Throwing Moblins can be found riding Totem Armos. In these instances, the Links will need to form a Totem to reach the Moblin's height to knock it down, causing the Totem Armos to self-destruct in the process.

In the Den of Trials, a "dark" variant of the Spear Throwing Moblin appears. These Moblins throw shadowy javelins that will jinx a Link it hits, preventing him from using his Sword.

In The Faces of Evil and The Wand of Gamelon, Moblins are called Moblin Spearthrowers.[4] These Moblins carry spears with them as they patrol the area. Most Moblins will not actively attack Link or Zelda, however, some Moblins crouch down and throw a barrage of spears at either hero. Their thrown spears can be blocked with the Shield. They are among the most common soldiers of Ganon in the lands of Koridai and Gamelon, appearing in numerous Stages. The Moblins that inhabit Nortinka in The Faces of Evil drop Snowballs after being defeated.

In The Faces of Evil, the minion Lupay enslaves Koridians by replacing their souls with Rubies, turning them into Moblin Spearthrowers.