Zelda Wiki
Register
Don't have an account?
Sign In
Advertisement
in: Akkala Highlands, Stables, Locations, Locations in Breath of the Wild 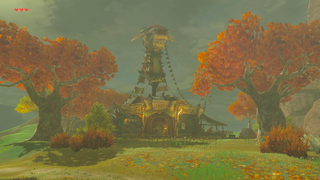 The South Akkala Stable is a location in Breath of the Wild.[1]

The South Akkala Stable is a Stable located in the Akkala Highlands. West of the Stable is the Ze Kasho Shrine, which stands high on a cliff overlooking the Stable. The South Akkala Stable contains every amenity characteristic to Stables, including Horse services, providing lodging, and a Cooking Pot for Cooking. It also contains some farmland, with Highland Sheep and Cuccos. Several crates are left outside which can be broken for small items. Inside the livestock pen, a Hylian Retriever can be befriended who leads Link to a Treasure Chest containing a Knight's Claymore.

The Stable is run by Dmitri, who mans both its Horse services and lodging. As with all other Stables, Beedle can occasionally be found here selling his wares.

A traveler named Rex can be found at the Stable, who asks Link about the Master Sword, denying its existence if he doesn't have the Sword, and calling it a fake if Link has already obtained the Sword.

The player may speak to Tenne, a woman who will tend to Link's Horse and suit them with Horse Gear if its bond has reached its maximum.

Outside the Stable is a worker named Jana, who is in charge of the flower patch and provides the "Little Sister's Big Request" Side Quest. A woman named Kaifa tends to the livestock on the Stable’s farm.

There is a recipe for Egg Tart on the wall inside the Stable and, if the The Master Trials DLC is installed, the second volume of Super Rumor Mill EX can be found on the a table.