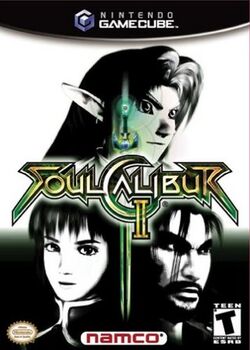 Box art for the US GameCube version

Soulcalibur II is a 2002 Arcade fighter that was simultaneously given home ports the following year for the Nintendo GameCube, PlayStation 2, and Xbox. The console versions were made distinct by including a different guest character unique to that platform. Link is unique to the GameCube version of the game, contributing to its popularity.

The game is set four years after the end of Soul Calibur, which based on calculations from a timeline released on the "Soul Archive" website, puts the game's story in the year 1591.

The wave of slaughters that terrorized Europe reached a sudden end. The knight in azure armor, Nightmare, and his followers were successful in collecting enough souls and were about to start the restoring ceremony on the ruins of the once-proud Osthreinsburg Castle. But just as the ceremony was to start, three young warriors assaulted the castle. In a matter of time the clan was defeated and Nightmare stood in front of the young warriors wielding the Sacred Trinity. After an intense battle Nightmare fell, but then the evil soul inside Soul Edge sent the young warriors into a vortex of hellfire and stood to confront them. As a result of Soul Edge's evil aura, Krita-Yuga revealed its true form: that of the Holy Sword, Soul Calibur.

The intense battle ended with the victory of the holy sword, but at the collapse of the vortex of Inferno, both swords along with the azure Nightmare were sucked in a void and expelled in another place. Siegfried Schtauffen, who was until a moment before the Azure Knight, restored his mind. Recognizing his sins, he set on a journey of atonement. Still the blade held a strong bond, and every night it took control of the body and took souls of those nearby. The efforts made by the young knight were fruitless, and four years later the Azure Nightmare returned.

Around those times various warriors came into contact of the blade's remaining fragments, revealing Soul Edge's ultimate survival after its defeat. Driven either to possess or destroy it, they join a new journey, while Nightmare starts his rampage once again, seeking souls to restore Soul Edge once again...

The Soul Edge is an ancient cursed sword in the Soulcalibur series.

Many warriors set out to destroy the sword, but almost none prevailed. The sword began to control an evil wizard, who was defeated by Link. To prevent this from happening again, Link set out to destroy it. He managed to destroy a fragment of the sword, ending the evil that threatened Hyrule. This is the strongest and most dominating sword Link has ever encountered.

Soul Edge has been wielded by many. The male Soul Edge is wielded by Nightmare, and the female version is wielded by Cervantes. Link can buy this weapon for 7,800 Gold in the Castor Shop while playing the Weapon Master mode. Link's Soul Edge causes for his defense and offense to increase to 135% and 140%, respectively; however, it drains his health by 2 HP every second.[1]

Link appears as a guest character on the Nintendo GameCube version of the game.

Hyrule's tranquility was shattered by the arrival of several disasters, which brought opaque, ominous clouds with them. Eventually, it was discovered that an unknown magician was to blame for all that had happened. Just as the people were about to lose all hope, the sun miraculously returned as Link, having been summoned by Princess Zelda to find the disasters' source, successfully defeated the magician. The people of Hyrule rejoiced in the belief that eternal peace would rule; but it eventually became clear that the magician responsible for the disasters was in fact controlled by an evil sword from another world, Soul Edge, and that the fragments of Soul Edge had been gathering in the other world.[2] Knowing that the resurrection of the evil blade must be prevented at all costs, Link chose to travel to the other world and destroy Soul Edge himself. He gathered his trusted Master Sword and Ocarina of Time, and transported himself off on a secret journey.[3] Eventually, he was successful in sealing away the evil within the Soul Edge, saving his homeland and quietly leaving the world he had come upon, leaving only a faint echo of his Ocarina.[4]

Instead of having the standard two or three costumes like every other character, Link has 4 different costumes: green, red, blue, and violet. His two starter costumes are the green and red tunic. To obtain the Blue Tunic, the player must buy it in the Castor Shop for 21,000 Gold, found in the Extra Chapter 1 of the Weapon Master mode. Only after buying the Blue Tunic can the player buy the Blue Ring Tunic from the original The Legend of Zelda, which is sold for the same price as the Blue Tunic.

In Soulcalibur II, Link is the only character with a ranged attack. His fighting style retains many of his signature moves from past games in the Zelda and Super Smash Bros. series. Some of these moves include the Spin Attack, the Jump Attack, the Down Thrust, the Jump Thrust, and the Dash Attack.

Like all Soulcalibur II characters, Link has a total of 11 weapons to choose from. His starting and most-balanced weapon is the Master Sword and Hylian Shield, and the rest of the weapons must be bought in shops in various cities in the Weapon Master Mode.