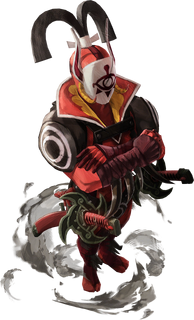 Right Hand of the Inverted Eye[1]

Sooga is a minor antagonist turned ally, Boss and playable character in Hyrule Warriors: Age of Calamity.[1] He is the right-hand man of Master Kohga, and serves as both his personal bodyguard and the top general of the Yiga Clan. He was later added as an unlockable Warrior in the Guardian of Remembrance DLC pack.

In-game, Sooga dual-wields large katanas with a focus on counterattacks. As a boss, he summons Yiga symbols around him. If the player attempts to attack him head-on, he'll respond with a powerful reprisal that slashes the player and any surrounding allies around him.

As a playable character, he retains the use of his swords. Unlike Kohga, his fighting style is more straightforward and focuses on high speed and power with some of his Strong Attacks hitting enemies with additional invisible slashes after landing hits on them. His Unique Ability is the Unseeing Eye where he assumes a brief defensive stance which can be used even in the middle of combos. If he parries an attack, he responds with a counterattack. Every time he counters, the next reprisal will be powered up, up to a stack of three. His enhanced Ability powers up his normal attacks when his counter gauge is full.

Sooga first appears as an emaciated traveler, begging Yiga footsoldiers for food before they surround him. Kohga calls them off and gives Sooga a Mighty Banana, saving him from starvation. He joins the Clan after this, rising up the ranks and becoming Kohga's right hand thanks to his formidable strength and combat ability.

In the main story of Age of Calamity, Sooga appears after Master Kohga's defeat in Gerudo Town, holding off the Four Champions just long enough for him to grab Master Kohga and make an escape.[4][5] He is also seen during Master Kohga's meeting with the seer Astor, who shows displeasure in the Yiga Clan's defeat. Sooga then appears at Hyrule Outpost, where he attempts to assassinate Zelda.[6] However, the Four Champions manage to defeat him and the Yiga Clan, and he quickly escapes.[7]

During their second meeting with Astor, Sooga shows great displeasure at working with the seer, criticizing for believing that Calamity Ganon can be controlled.[8] During the Yiga Clan attack on Akkala Tower, Sooga appears multiple times and does battle against the Four Champions - once again, he is defeated and makes his escape. Sooga also appears during the Four Champions' siege on the Yiga Clan Hideout, and is defeated once more. Enraged that Astor would allow this to happen, Sooga and Master Kohga threaten to turn against the seer.[9] However, Astor reminds them that harming him would make them enemies of Calamity Ganon,[10] frightening Master Kohga and Sooga enough to make them decide against it.

Shortly after the defeat of the Blight Ganons, Sooga and some Yiga Blademasters intercept Daruk and Yunobo's celebration by attempting to make Kakariko Village their new hideout, but are all thwarted quickly.

After the awakening of Calamity Ganon, Astor betrays the Yiga Clan and kills many Yiga Footsoldiers, using their life essence to revive the four Blights,[11] before turning on Master Kohga and Sooga and creating a Hollow of Link to kill them in order to offer them as blood sacrifices.[12] Sooga tells Master Kohga to run while he holds Astor and the Hollow off.[13] However, Master Kohga decides to stay and fight alongside Sooga,[14] to which Sooga replies that he will protect Master Kohga with his life.[15]

Sooga and Kohga narrowly escape with their lives, but Sooga was injured at some point, and they both try to retreat. Sooga repeatedly asks Kohga to leave him behind, but Kohga insists that they fight on together. They are both chased by the Blight Ganons and a Malice Moblin, as well as many monsters from Ganon's army, who they formerly fought alongside with during the game's events. They avoid Windblight Ganon and Thunderblight Ganon, but are forced to fight Waterblight Ganon and Fireblight Ganon. During this confrontation, Sooga makes a desperate move to protect the surviving Yiga and goes on the offensive, exclaiming that Kohga cannot protect everyone on his own. Eventually, they ward off the Blight Ganons, but Sooga's strength gives out after this and he is unable to continue, forcing Kohga to carry him. Sooga insists Kohga to leave him behind and save himself, but Kohga once again refuses, causing Sooga to remember his first encounter with Kohga. In this flashback, Kohga saves his life by ordering two Yiga Footsoldiers to leave him be, and feeding him a Mighty Banana, saving him from dying of starvation.

The Blight Ganons return, and Sooga, using the last of his strength, makes a final effort to sacrifice himself and repay Kohga by using a powerful Yiga technique that pins the Blight Ganons in place long enough for Kohga to escape, asking if he has paid Kohga back properly.

He is heavily implied to have died here, but, curiously, he is able to stand and draw his blades after using his technique when he previously could not, implying he might have somehow siphoned energy from the Blight Ganons, becomes playable, and appears as an ally unit in future side missions, while also appearing in the second credits sequence, leaving his ultimate fate quite ambiguous.