This article is about the Song in Ocarina of Time. For the Shrine Quest in Breath of the Wild, see A Song of Storms. 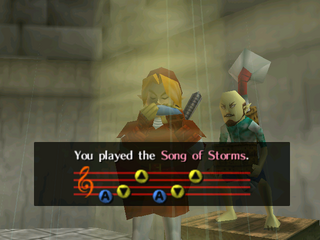 Link learning the "Song of Storms" in Ocarina of Time

Summons rain
The "Song of Storms" is a recurring Song in The Legend of Zelda series.[1]

The "Song of Storms" is taught to Adult Link by the Phonogram Man inside the Kakariko Windmill in Ocarina of Time. When played, it can summon rain, reveal secret grottoes, and water Magic Bean sprouts to produce Fairies. In several areas throughout Hyrule, if Navi turns green, Link can play the "Song of Storms" to summon a wingless Fairy which restores Hearts and the Magic Meter. If Link plays the "Song of Storms" inside the Kakariko Windmill as a child, it will speed up the windmill dramatically, causing the well to drain and open the access to the Bottom of the Well.

The song can also be played to the Fabulous Five Froggish Tenors in Zora's River to obtain a Piece of Heart.

The "Song of Storms" was a song composed by the Composer Brothers of the Ikana Canyon in Majora's Mask. When Link finds Flat's crypt beneath the Ikana Graveyard, he teaches the song to him. It represents his sadness of losing his brother Sharp and his anger for his betrayal.[2] If Link plays the song to Sharp in the Spring Water Cave, he will revive the Ikana River.

Playing the "Song of Storms" after getting cursed by a Blue Bubble immediately dispels the curse.

In Oracle of Seasons, the "Song of Storms" is played in the Eastern Suburbs area where the windmill is located. It is played by Guru-Guru on his phonograph.

In Hyrule Warriors, the "Song of Storms" is one of the songs playable by Sheik as her Strong Attack. It causes a storm cloud to temporarily surround Sheik, hurting any enemies that touch it. The song can also be heard in the background when Zelda performs a Strong Attack while using the Baton.

The "Song of Storms" is in triple time and features a 4-bar intro. The rest of the piece is 7 bars long and looped ad infinitum, with the last bar of the 8-bar melodic phrase overlapping with the first bar of the intro. Even though the piece is only 11 bars long, it uses two different sets of instrumentation to add variety. The first set primarily uses an organ for the melody, while the second set uses an accordion and glockenspiel or celeste. Harmonically, the piece is set in D Dorian with a brief use of B-flat Major.