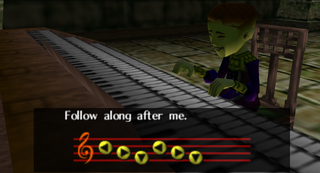 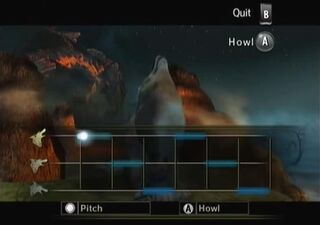 Healing souls and turns them into masks (MM)
Calling the Golden Wolf (TP)
Healing Link (ST)
The "Song of Healing" is a recurring Song in The Legend of Zelda series.[1]

In Majora's Mask, the "Song of Healing" is taught to Link by the Happy Mask Salesman after Link, cursed in the shape of a Deku Scrub, retrieves the stolen Ocarina of Time from Skull Kid. The notes of the song heal Link's soul, and the young hero returns to his Hylian form. The Deku Mask then materializes and is kept as a memento of his time as a Deku.[2] Link utilizes the song many times thereafter, as it has the capability of healing a soul and giving peace to those who cannot forget.[3][4][5]

Frequently, using the "Song of Healing" on tormented individuals yields a mask. The Goron warrior Darmani III and the Zora guitarist Mikau each grant Link the use of their mortal bodies through transformation masks in return for his promise to aid their people.[6][7][8] The spirits, finally at ease, depart to the afterlife as Link watches over their graves.[9][10]

The "Song of Healing" is also used to heal Kamaro—a dancer's ghost found in Termina Field—[11] and the researcher in Ikana Valley.[12] If the song is played to the Poe Collector in the Spirit House, he will lower the price of his mini-game from 30 to 10 Rupees, while commenting that not all spirits can be healed by that song.[13]

Playing the "Song of Healing" for Sharp will have him remark that a song like that no longer has an effect on someone like him.[14]

It will also repair broken signs upon being played near them.

In Twilight Princess, Wolf Link can howl the "Song of Healing" in Death Mountain to summon the Golden Wolf. Once he is found, the Hero's Spirit then proceeds to teach Link the Shield Attack.

In Spirit Tracks, the "Song of Healing" is learned at the entrance to the Forest Temple. If it is not learned there, there are other opportunities at the entrances to some, but not all of the other temples. However, the song itself sounds and functions entirely differently. Playing it with the Spirit Flute while in a dungeon causes the Spirit of Healing to appear and heal Link completely. It can only be used once per dungeon.[15][16]