Not to be confused with the "Song of Awakening" 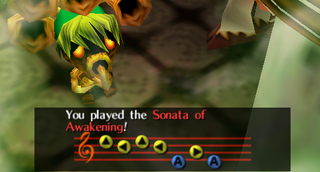 Link learning the "Sonata of Awakening"

Awakens those in deep slumber
The "Sonata of Awakening" is a Song in Majora's Mask.[1]

The "Sonata of Awakening", originally known only by the Deku Royal Family, is a special melody played on the Deku Pipes.[2] The captured Monkey in the Deku Palace teaches it to Link after the young hero reaches him from the Inner Palace Garden entrance.[3] By playing the sonata, one has the ability to wake anything that is asleep, such as a Deku Scrub.[4]

The "Sonata of Awakening" is needed to enter Woodfall Temple by making it rise from the depths of Woodfall. Later on, when Link reaches the Ikana Graveyard, he must play this melody to Captain Keeta in order to wake him up and race with him to receive the Captain's Hat. With the exceptions of playing it for Captain Keeta and for the sleeping Deku Scrub in the Swamp Spider House, the song only works if Link is wearing the Deku Mask.

A sonata literally means a piece played, as opposed to a cantata, which is a piece sung.