Zelda Wiki
Register
Don't have an account?
Sign In
Advertisement
in: Enemies, Common Enemies and Traps, Soldiers,
and 5 more 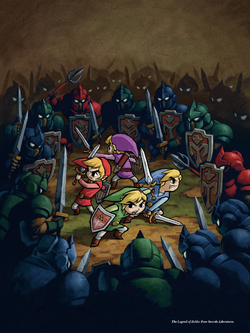 Soldiers resemble normal Hyrulean guards, but their face is always obscured by their distinctive helmets that give no indication of what sort of man lies beneath. The only thing visible from underneath their armor are two glowing eyes. Their armor occasionally has subtle variations between each type of Soldier. Usually the color of the armor denotes their defensive strength, with the green variety being the most common and weakest, and the red variety the strongest. Unlike Darknuts, they are often defensively weak and appear in large numbers. Some Soldiers, such as the Sword Soldier, protect themselves from frontal attacks with their sword or spear instead of their shield. They may also charge at Link with these weapons.

In A Link to the Past, Soldiers are Hyrulean guards that have been magically brainwashed by Agahnim and are under his control.[2] They follow his bidding in kidnapping the Maidens, including Princess Zelda, who they imprison in the Hyrule Castle dungeon and whose cell is guarded by a Ball & Chain Trooper. Link first encounters them while infiltrating the heavily-guarded Castle on his mission to rescue the Princess, and they later appear throughout the Light World hunting for Link.[3][4] Their search extends to Kakariko Village, where the Informant Woman will call upon their assistance if they spot Link, which summons two green Spear Soldiers.[5] Even after Link defeats Agahnim in the Hyrule Castle Tower, the possessed Soldiers can still be found patrolling the Light World.

The regular Soldiers wield basic dagger-like swords and typically patrol around the interior of Hyrule Castle. Rather than actively hunt out Link, they patrol in a random, aimless path. However if they do spot Link, they will charge directly at him, but will not react if he moves. Unlike other types of Soldiers, they do not react to sound.

Sword Soldiers bear large swords, setting them apart from regular Soldiers. They are the most distinctive and common type of Soldier, and can commonly be found across Hyrule, following patrol routes and reacting to Link upon sight or sound. When they notice him, they will charge and attack with their blades. Their blades are able to parry Link’s Sword. Because of this, they must either be defeated by striking their vulnerable backsides, or by striking them from an angle where their sword will not block the attack. Stunning them, such as with the Boomerang, also makes them vulnerable. Three varieties of Sword Soldiers exist: the common Green, the stronger Blue, and the aggressive assault variety, which wear blue horned armor. Blue assault-type Sword Soldiers appear only in Hyrule Castle Tower. They hold their blades upwards and immediately charge as soon as Link enters a room.

In Four Swords Adventures, all of the Soldiers become hostile due to having fallen under Vaati's control.[6] [7] They appear mostly the same as in A Link to the Past, but some adopt new strategies and come in different color variations. The regular, Sword, Bow, Bomb, and Ball and Chain varieties all appear. A variety of the Ball and Chain Soldier, wielding a fiery flail, also appears.

The regular Soldiers are similar to those in A Link to the Past, although they behave more like Sword Soldiers, in that they carry slightly smaller swords and charge at the Links. They are however considerably weaker and thus tend to appear in large packs, often following a Chief Soldier who gives them commands. Blue, Green and Red Soldiers exist, with Red being the strongest. Green varieties only appear in dungeons, but possess the same strength as the normal Blue kind. If a Chief Soldier is defeated while normal Soldiers remain, they will run wild with no orders, and eventually explode.

Soldiers in A Link Between Worlds are heavily based on the Soldiers from A Link to the Past, and thus share much of their behavior. Unlike the enemy Soldiers of A Link to the Past, the Soldiers were originally Paintings that were painted by and later brought to life by Yuga, making them distinct from the loyal Hyrule Soldiers. They first appear as graffiti painted on the exterior walls of Hyrule Castle, which the Hyrule Soldiers try to remove. They later emerge from the walls whenever Link comes within their range during Yuga's siege of the Castle. The regular, Sword, Bow, Bomb, Spear, and Ball & Chain varieties all appear. Curiously, no Soldiers in A Link Between Worlds will respond to any source of sound that Link makes when he hits a wall with his Sword or when ramming into walls with Pegasus Boots; they only react to Link when they see him. Soldiers are capable of recognizing Link while he has merged with a wall, and will attempt to attack his Painting.

Regular Soldiers wear green armor, and carry small, dagger-like blades. They behave slightly differently from their ‘’A Link to the Past’’ incarnation, in that they will pursue Link once spotted, but will not chase after him very far.

Sword Soldiers can appear wearing either green or blue armor, the latter of which closely resembles the assault-type Sword Soldier from ‘’A Link to the Past’’. The Sword Soldiers tend to drop Green and Blue Rupees respectively when defeated.

The Soldiers' Lorulean counterparts are the Lorule Soldiers, which have a Sword and Spear variant, and behave the same as the Hyrulean enemy Soldiers.

In Tri Force Heroes, Soldiers appear in Levels of the Fortress and Sky Realm areas of the Drablands. They appear to be under Lady Maud's command, as these domains are under her control, and are where the Links eventually find her. While resembling the Soldiers from A Link Between Worlds, Sword Soldiers in Tri Force Heroes behave with considerably more intelligence, being able to deflect Link's attacks with their Swords and quickly resume their advance after a brief moment. To defeat them, the Links must either attack them with their items, or strike the Soldiers from behind or while they recover from deflecting Sword strikes.

In the Fortress, Soldiers appear the same as they did in A Link Between Worlds. They come in the Sword, Spear Throwing, Bomb and Ball and Chain varieties. The Blue Sword Soldier is slightly different from their A Link Between Worlds incarnation, however, as they carry a large shield that protects them from frontal attacks. These shields can be pulled off with the Gripshot, however. In the Training Ground, Soldiers also appear riding on Totem Armos. These Soldiers may attempt to make their Armos jump up high and crash down onto the Links during their attack. If they are defeated or knocked off, their Totem Armos will eventually self-destruct.

Sky Soldiers are a different group of enemy Soldiers that appear in Tri Force Heroes, which exclusively appear in Levels of the Sky Realm. They are similar to the ordinary Soldiers in that they come in multiple different classes: including Sword, Spear, Bomb, Ball and Chain, Fire Ball and Chain, and a newer class called a Sky Shield Soldier identical to the Blue Sword Soldier. However they are gold-colored, and are significantly stronger than the ordinary Soldiers. In the Sky Temple, Sky Soldiers also appear riding Totem Armos in the second Stage.

In the A Link to the Past comic by Shotaro Ishinomori, Link fights against Soldiers several times throughout his adventure. He first encounters one shortly after receiving the Sword and Shield from his uncle, although he easily defeats it and discovers that the Soldiers are not actually human and are just creations of Agahnim. He then shortly finds that Princess Zelda is being taken away by two guards. Link then distracts the Soldiers to rescue the princess and eventually they lose sight of the pursuers. After Agahnim kidnaps Zelda in the Sanctuary, Agahnim orders all of his Soldiers to search for Link, who they end up finding in Kakariko Village outside of Sahasrahla's house. Despite their attempts to apprehend Link, he manages to escape.

Soldiers later appear after Link obtains the Pendant of Courage from Sahasrahla in the Eastern Palace. Just as Sahasrahla hands the pendant to Link, the Soldiers pursuing Link find him. Empowered by the pendant, he easily dispatches their leader and sends the rest fleeing.

Spear Soldiers are briefly seen in Chapter 5. After Link lands on Hyrule Castle's highest tower via an air balloon, he is greeted by three Spear Soldiers, although he defeats them with the Master Sword.

Soldiers also make an appearance in the A Link to the Past manga by Akira Himekawa. The Soldiers aren't brainwashed Hylians, and are actually monsters.

Soldiers appear in the Four Swords manga by Akira Himekawa.

Soldiers are enemies in Cadence of Hyrule. They are hostile even towards Zelda and appear with Bows, Swords, and/or Shields; the latter must be attacked from behind or the sides to deal damage if the player does not have a Ring of Piercing. Soldiers have two to four Hearts, depending on their color. They move every other beat.

A new type of soldier introduced in Cadence of Hyrule, called the Guitar Soldier, wields an electric guitar that knocks the player back and mutes the music when it hits the player, but does not deal direct damage unless the player walks directly into them.

Unused Cannon Soldier
from A Link to the Past