"A long spear once used by the guards of Hyrule Castle. Easy to use but difficult to master. The iron tip is very sturdy and the shaft will not burn when exposed to flame."
— Hyrule Compendium

Soldier's Spears are items from The Legend of Zelda: Breath of the Wild. They are Spears originally used by Hyrulean Soldiers who guarded Hyrule Castle before the Great Calamity. They are occasionally wielded by Bokoblins and can be equipped by Link. One can be found at Kara Kara Bazaar in the Gerudo Desert, another with a Soldier's Shield at the Snowfield Stable in the Tabantha Tundra region. One appears inside a hidden cave of the West Necluda region during the side quest "Misko, the Great Bandit".

Hoz the soldier hired to defend the East Akkala Stable also wields one in his job defending the stable. 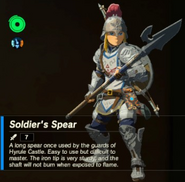 Link wielding the Soldier's Spear in the inventory screen

Hoz wielding his Soldier's Spear
Add a photo to this gallery

Retrieved from "https://zelda.fandom.com/wiki/Soldier%27s_Spear?oldid=524746"
Community content is available under CC-BY-SA unless otherwise noted.