"Headgear made from sturdy metals for frontline soldiers. Praised for their defensive capabilities, the only helms that remain are those that survived the Calamity."
— In-game description

Soldier's Helms was originally used by frontline Hyrulean Soldiers. Link can occasionally encounter other characters wearing them such as the soldier Hoz who guards East Akkala Stable, and Savelle a traveler who rides his horse between Tabantha Bridge Stable and Serenne Stable. Yiga Footsoldiers may wear them while randomly disguised as Savelle or Hoz.

The Soldier's Helm is tied with the Ancient Helm, Diamond Circlet and Cap of the Wild for having the highest defense among headwear, though it lacks the bonus effects of each. However, the Soldier's Helm is cheaply purchased, and most of the upgrade materials needed can be obtained quickly and easily. 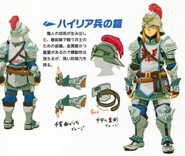 Retrieved from "https://zelda.fandom.com/wiki/Soldier%27s_Helm?oldid=543738"
Community content is available under CC-BY-SA unless otherwise noted.