Please improve it as you see fit. Editing help is available.
This article has been flagged since March 2020.

In most titles, they serve the Royal Family of Hyrule and are charged with the protection of the citizens under the monarchy's rule. Though they appear mostly in Hyrule, Soldiers appear in other lands as well, such as Termina and Labrynna. Soldiers are known for their fervent sense of duty, though their infallible obedience occasionally leads to manipulation by evil forces. They generally bear a strong resemblance to soldiers of medieval Europe.

In A Link to the Past, friendly Soldiers are only seen briefly before losing their minds to Agahnim's magic.[6] All friendly Soldiers wear golden armor and carry a large shield, but have no visible weapons. However, in the GBA version, one of them mentions that he carries a sword.[7] During the rainstorm at the beginning of the game, the Soldiers prevent Link from straying too far from Hyrule Castle. They will offer Link helpful advice if he speaks to them.[8] However once Link approaches Hyrule Castle, the guards he finds are all hostile and attack him on sight. Once this happens, the Guards with golden armor disappear, and enemy Soldiers patrol the entire land of Hyrule. They are also summoned when certain villagers in Kakariko Village spot Link. After Agahnim is defeated, the Soldiers' curse is broken and they are returned to normal.[9]

In Ocarina of Time, the Soldiers guard Hyrule Castle, Castle Town, and Kakariko Village. The average Soldier is warm and welcoming, and may offer helpful advice. However, the Castle Guards tend to be sterner and will stop commoners such as Link from entering the castle.[10] Link must sneak past them to get into the castle and, ultimately, to Zelda's Courtyard. Alternatively, one of the Castle Guards can be bribed into opening the castle doors.[11]

In Kakariko Village, the Death Mountain Trail Gatekeeper guards the gate to Death Mountain Trail. He will not open the gate until he sees Zelda's Letter. This Soldier, whose son asked for the Keaton Mask, will ask Link to buy the mask for him.[12] This begins the Mask Trading Sequence. There are two other Soldiers in Kakariko: one stands at the Village entrance while the other stands outside Impa's House. Self-proclaimed "clock Soldiers of Kakariko", they will tell Link the time if he talks to them.[13]

After the obtaining the Ocarina of Time from a fleeing Princess Zelda, a fatally wounded Soldier appears in the Back Alley of Castle Town. The Soldier tells Link of how Ganondorf betrayed the King, and how he was injured fighting Ganondorf's men while trying cover Zelda's escape with Impa.[14] He urges Link to proceed to the Temple of Time, dying shortly after.[15] The Soldier disappears once Link goes into the future, and so the scene is permanently missed if he does not meet the Soldier before pulling the Master Sword from the Pedestal of Time.

After Link travels seven years into the future, the Guards have all but disappeared, having been either slaughtered or released from their posts in Ganon's reign. It is implied that the lone Soldier in the Guard House in Ocarina of Time becomes the Poe Collector in the future, since he expressed interest in studying ghosts.[16] The Poe Collector's shop is also located at the exact same location as the Guard House in the future.

In Majora's Mask, there are Soldiers that guard each exit of Clock Town. They will not allow any children get past them, therefore Link may only pass in Goron form, Zora form, or as himself once they notice his sword.[17] If Link's sword is stolen by a Takkuri, the Guards will still allow him to leave town and will inform him about the Curiosity Shop.[18] Deku Link may not exit as he is seen as a child.[19] The Guards are mostly unaware of what goes on in the town because they cannot leave their posts,[20][21] unless they receive new orders from Captain Viscen.[22] The guards of Clock Town are the only corps of Soldiers who do not answer to a higher power other than their Captain. On the Final Day, Clock Town Soldiers are seen gazing worriedly at the approaching Moon. Much like their Captain, the Guards are dismayed by those who choose to stay.[23] They will encourage Link to leave town if he speaks to them.[24] The Guards themselves remain at their posts until the Moon falls, awaiting new orders that never come.[22]

Captain Viscen is the leader of the Clock Town Guards in Majora's Mask. The Captain and his Guards have a significant role in this game, as they are an independent force that does not serve any royalty. Viscen has a notable influence in the decision-making of the town, although he must ultimately respect Mayor Dotour's decisions. He is greatly concerned with the people's safety, and, with the inevitable approach of the Moon, tries to have the Mayor order an evacuation of the town.[25] The Captain's proposal is met with opposition from the stubborn Mutoh, the head of the Carnival Committee who also has a significant influence on the town.[26][27] Ultimately, the Mayor settles the matter by allowing to have citizens decide for themselves if they want to flee.[28]

An injured Soldier named Shiro appears on the Road to Ikana. Shiro is invisible and can only be spotted using the Lens of Truth.[29] If Link gives him a Red or Blue Potion, he will reward Link with the Stone Mask.[30] In Majora's Mask 3D, however, he is instead relocated to the Pirates' Fortress.

It is said that the Stalchildren of Majora's Mask were the cursed Soldiers of the Ikana Kingdom.[31] Skull Keeta was their Captain.[32]

In Oracle of Ages, Guards appear as enemies and characters that work for Queen Ambi.

In Four Swords Adventures, Soldiers are possessed by Vaati. They are the most populous foes in the game, and resemble their A Link to the Past counterparts greatly. A massive Soldier known as Chief Soldier is powerful enough to serve as the boss of two stages: Lake Hylia and Death Mountain Foothills. Like in A Link to the Past, Guards are classified by weaponry and they include the archer, Ball and Chain Soldier, bomber, and swordsmen varieties.

Vassals are the diligent servants of King Daltus in The Minish Cap. Some guard Hyrule Castle, while others are found within Hyrule Town.

In Twilight Princess, Soldiers can be seen patrolling Hyrule Castle Town alone or in groups, walking in single file. They try to look calm and go about their daily routine, even though they have no access to Hyrule Castle.[33] If Link enters the town as a Wolf, the Soldiers will surround him but will not attack, trembling and whimpering. If Wolf Link then performs a Spin Attack, they will run away screaming, often leaving behind Rupees or Arrows.

The poor state of the guard encourages a group of vigilantes, known as The Resistance, to take it upon themselves to restore peace to Hyrule.[34] Their meetings are held in the back room of Telma's Bar whose owner, Telma, is particularly disdainful of the Hyrulean guard.[35] In a humorous cutscene, a group of Soldiers eagerly volunteer to escort Telma, Ilia, and a sickened Ralis to Kakariko Village.[36] However, once Telma mentions the path is infested with monsters, the Soldiers quickly disappear.[37]

In certain areas of Hyrule Castle, Link can detect ghostly spirits of deceased Soldiers using his wolf senses. The ghosts will guide Link through the castle and help him solve puzzles by pointing to areas of interest. The identity of these Soldiers is never revealed, but they are speculated to be the slain Soldiers from Zant's attack on Hyrule Castle. Interestingly, they appear to wear different uniforms than the living Soldiers.

The Soldiers in Twilight Princess are the only ones in the entire series that do not prevent Link from progressing in the game.

In A Link Between Worlds, Soldiers are found patrolling Hyrule Castle's exterior and interior. They wear light surcoats and stovepipe shako hats, both of which are red in color. Unlike most iterations in the series, these Soldiers bear a closer resemblance to soldiers from the Victorian era than the Medieval era. They are lead by the Captain. During the beginning of the game, several are shown trying to scrub away paintings of evil Soldiers that have mysteriously begun appearing on the castle walls. With the help of Yuga, the evil Soldiers take over the castle. After the castle is seized, the original Soldiers fall back to Kakariko Village, and remain there for the rest of the game. A few Lorulean counterparts of these Soldiers can be found throughout Lorule, such as the Captain. Others have since abandoned their duties and left to worship the Gemesaur King at the Dark Ruins.

The Captain is the leader of the Hyrulean Soldiers. He appears briefly to collect his new sword and shield from the Blacksmith, but forgets to take his sword with him and mistakenly leaves it behind, forcing Link to deliver it. He is turned into a painting by Yuga at the Sanctuary before Link can give it to him, however. He is later brought back to normal following Yuga's defeat, and is given back his sword.

In Breath of the Wild, Link can wear Soldier Armor. 100 years prior to Hyrule Kingdom's fall in Breath of the Wild, Guards are briefly shown in a flashback of Hyrule Castle, standing beside King Rhoam. In this flashback, they are also seen guarding the Castle. They wear plate armor with chainmail underneath. 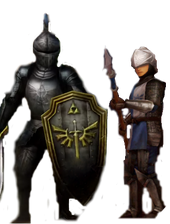 In Hyrule Warriors, Soldiers appear as the fighting troops in numerous Forces. Infantry Soldiers are common and make up most of the numbers in a Force. They are followed by Captains, which are stronger variants that take lead and take on various other roles determined by their type, as well as Generals or Commanders, which are typically much stronger Soldiers that are crucial to a Force. Soldiers are tasked with defending areas and attacking enemies. They often occupy Keeps and Outposts their Force has claimed, which will also increase their numbers if allowed time.

Soldiers can appear as both ally troops and enemies, and their races vary depending on the Force. Hylian Soldiers accompany the Hyrulean Forces, but are also sometimes joined by Goron Soldiers, who also fight on their own Force as well. The Hylian Soldiers wear chain mail and surcoats while the Captains wear plate armor, and are equipped with either spears, maces, swords and shields or bows. Link was originally a Hylian Soldier in-training before he became the hero. The Dark Forces and Ganondorf's Forces employ numerous monsters as their Soldiers, commonly ranging from Stalchildren, Bulblins and Bokoblins.

In the "Sealed Ambition" Scenario, several Soldiers turn on the Hyrulean Forces and become enemies when Ghirahim takes control of their minds, resulting in mutiny and must be defeated. In "The Sacred Sword", the Ghost Forces that appear consists of ghostly Soldiers that defend the Temple of the Sacred Sword from those seeking the Master Sword. They attack the Hyrulean Forces when Wizzro takes control of them.

Soldiers in their Spirit Tracks design appear as spectators on the Hyrule Circuit track.

Hyrulean Soldiers are enemies in Cadence of Hyrule. They are hostile even towards Zelda and may appear with Boomerangs, Bows, or Swords and Shields. Each Hyrulean Soldier has four Hearts.