"That shining sphere illuminates this world. It's called a Sol. It's like the sun of your world, Link. The power of the Sol is the source of life in this world... it is pure power."
— Midna

Sols are items from The Legend of Zelda: Twilight Princess. They are the physical equivalent to the sun from the world of light and serve as the power source of the Twilight Realm. Sols can be placed in special pedestals that activate something, such as floating platforms. The Sols hold the power to transform Shadow Beasts back into their original Twili forms. It is unknown whether they provide heat as well as light.

Link eventually gathers the pieces of the broken Mirror of Twilight and restores the entrance to the Twilight Realm. He enters Zant's Palace of Twilight and inside, finds two Sols, which are guarded by two Zant's Hands. Once taken from their "pedestal", the Zant's Hands awaken and slowly chase after Link in order to retrieve the Sols. Link uses the Sols to escape safely to the outside of the palace with the Sols and places them on pedestals at the very center of the Twilight Realm, and the Master Sword is infused with their power, creating the Light Sword, allowing him to cut through the Shadow Crystal Fog and advance further into the Palace of Twilight, as well as restore transformed Twili, and defeat Twilit enemies with one blow.

Midna's Level 3 Shackle, the Sol Shackle, is inspired by the Sols. In addition, Twili Midna uses Sols in two of her Mirror moveset's combos. One involves her summoning a Sol to smash it at her enemies; another involves her using the Sky Cannon to fire three Sols. 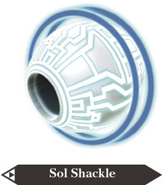 Promotional Render of the Sol Shackle from Hyrule Warriors
Add a photo to this gallery
Retrieved from "https://zelda.fandom.com/wiki/Sol?oldid=493653"
Community content is available under CC-BY-SA unless otherwise noted.