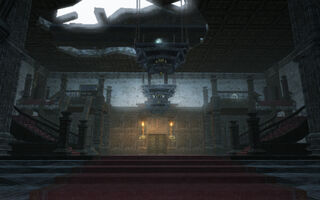 Located in the Peak Province, Link can find the manor at the end of Snowpeak Top's descending gorge. The first time he looks for it, he slides alone towards there using a frozen leaf. Later visits down the gorge require him participating in a Race against either Yeto or Yeta.

The Snowpeak Ruins is a decrepit mansion, home to a Yeti couple. Yeto lives in the mansion with his wife Yeta, but they only inhabit the front rooms and the bedroom. Yeto resides in the mansion's kitchen, where he prepares Soup for his ill wife using the Reekfish he caught in Zora's Domain. Link is allowed to scoop some of the Soup for free into an empty Bottle, which replenishes Hearts when drunk. The vacant back rooms become home to a host of monsters that invaded the mansion after the second Shard of the Mirror of Twilight came to rest there. Yeto had found it and given it to his wife Yeta. The mansion has three floors, with the predominant theme being ice. The goal during its exploration is to reach the bedroom on the third floor, where the Mirror Shard is kept. The item obtained in the dungeon is the Ball and Chain after defeating the mini-boss, Darkhammer.

The ruins are explored in stages, as Yeta attempts to direct Link to the correct location of the Bedroom Key. Due to her current condition, her memory is poor, and she unintentionally misleads Link to find first the Ordon Pumpkin, then the Ordon Goat Cheese. These two items are used by Yeto to transform his Reekfish broth first into the Good Soup, then into the Superb Soup.

Many areas of the dungeon are clogged by large blocks of ice, which can only be broken using one of the Cannons found within the dungeon (and subsequently the Ball and Chain). The main enemies encountered within Snowpeak Ruins are mostly ice-based, including Freezards, Mini Freezards, Chilfos, White Wolfos and Ice Keese.

The mansion is last seen during the game's end credits; a Heart "pops" out from the ruins, indicating the endurance of Yeto and Yeta's love.

The Snowpeak Ruins appears as a Ranger Mode Scenario in Level 6 in Link's Crossbow Training. Link can freely navigate a few rooms and the courtyard of the mansion. Chilfos and Ice Keese are the only enemies in the area. The majority of the Chilfos are lined up on high ledges. Upon seeing Link, they will throw their impaling staffs towards him. An unarmed Chilfos can be destroyed in a single shot, but those holding their staffs can block four shots; alternatively a Bomb Arrow can destroy even neighboring enemies. The courtyard is divided by large blocks of ice, which can be eliminated using a charged shot from the Crossbow.