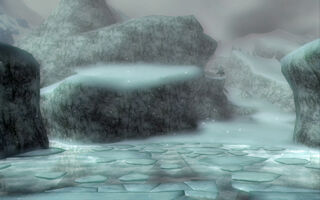 Snowpeak Top
Zora's Domain
Snowpeak,[1] also known as Snowpeak Mountain and the Northern Mountain,[2][3] is a location in Twilight Princess.

It is a mountainous region that composes all of the Peak Province, situated in the northwest portion of the Hyrule map. Snowpeak is home to the fifth dungeon of the game, Snowpeak Ruins, and it is mainly inhabited by Ice Keese and White Wolfos, along with two Yetis, Yeto and Yeta. The only entry to Snowpeak, other than warping, is through a small tunnel in Zora's Domain, located in the Lanayru Province. The highest point in Snowpeak is Snowpeak Top, wherein lies a tree with frozen leaves that helps Link race down the hill to Snowpeak Ruins.

After learning from the Sages that one of the shards of the Mirror of Twilight is located in Snowpeak, Link and Midna head off to the area to try and find some clues.[4] However, the pair encounter Ashei near the entrance to Snowpeak, who tells them that a beast has been frequently seen in Zora's Domain stealing a rare fish known as the Reekfish, found only in the Zoras' home.[5] Hoping that Link will found out more clues about the Snowpeak creature, Ashei hands over a sketch of the "beast" to Link.[6] The young hero then heads off to the Kakariko Graveyard and shows Ralis Ashei's sketch, who immediately recognizes the creature as well as the Reekfish depicted in the drawing.[7] The prince thus provides Link with the Coral Earring, which is a special lure necessary to catch the rare fish.[8]

Catching a Reekfish allows Link to use his wolf olfactory senses to pick up the fish's smell, whose stench eventually leads him to Snowpeak Top where Yeto, the so-called Snowpeak beast, is found. Link tells Yeto of that he is searching for a fragment of the Mirror of Twilight, which prompts the Yeti to invite him to his mansion located at the bottom of Snowpeak, saying that he found a mirror piece earlier on.[9] After snowboarding down the mountain using the frozen leaves of a nearby tree, Link enters the Snowpeak Ruins and ultimately recovers one of the Mirror Shards upon the defeat of Blizzeta.

From this point on, Link will be able to find Yeto and Yeta at Snowpeak Top, where they will offer to race the young hero down the mountain and reward him with a Piece of Heart if he bests both Yeti.[10]

Also known in Japanese as 雪山 (Yukiyama), "snowy mountains". The name Snowpeak most likely refers to the highest peak, but the surrounding terrain is seen in-game as a range of snowy mountains.The Spanish name for Snowpeak, "Pico Nevado" shares its name with Snowhead from Majora's Mask.