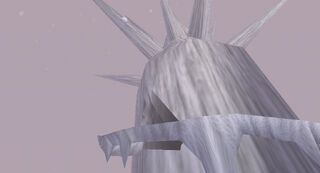 The exterior of the Temple in Majora's Mask

The temple is found in the arctic, hazardous northernmost zone of Snowhead, at the top of an ice formation.[2][3][4] It is protected by an invisible, giant Goron, who blows a blizzard to protect it.[5][6] The Goron can only be seen by using the Lens of Truth, and can be put sleep by playing the "Goron Lullaby" on the Goron Drums as Goron Link.[7][8] Playing the Lullaby causes the Goron to curl over to the side, opening the entrance to the Temple.

Puzzle-wise, the Temple is based on a floor plan of four floors and one basement. All four floors have a big, central room in common; in it, there is a huge circular expanse that Link can traverse initially. Higher floors require Goron Link to curl and jump using ramps to entrances on the opposite side of the room's large chasm. As Link progresses on his way, he finds that the bottom floor of the main room can be elevated with a press of a switch to reveal a passageway to the mini-boss room. Beating the Wizrobe mini-boss will award Link with the Boss Key, a vital item needed to access the room of the creature responsible for the curse on Snowhead Mountain, Goht.

When the bottom floor of the main room rises, it obstructs the entrance to the boss room on the third floor. Thus, Link (in Goron form) must break the weakest segments of the floor's base, one of which is located in floor two and the other in floor three. Link must do this only after the Boss Key is collected; if he breaks the weak ice segments of the pillar before collecting the aforementioned Key in floor four, he will not be able to collect it due to obstruction. To amend this, the young hero must press the switch that appears in the basement to bring down the pillar, then press again the switch that elevates it, resetting the room.

In this dungeon, Link receives the Fire Arrows after defeating Wizrobe for the first time. These Arrows are useful in breaking snowballs, melting ice, and defeating enemies with greater ease.[9] In addition, if Link is able to collect all 15 Stray Fairies in the dungeon and return them to the Great Fairy, he will be rewarded with a Magic Meter upgrade in the original game,[10] or an upgraded Spin Attack in Majora's Mask 3D.[11][12] The boss of this Temple is the Masked Mechanical Monster Goht. After his defeat, Link receives a full Heart Container and Goht's Remains.[13] The cursed winter covering Snowhead will also be lifted upon his defeat.

Contrary to its theme, this ice-themed Temple has a few lava-filled rooms. However, Goron Link, the form used most frequently in this Temple, is well equipped for them, having a heat-resistant hide.