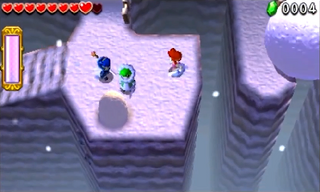 Freezlord
Snowball Ravine is a Level in Tri Force Heroes.[name reference needed] It is the second Level in the Ice Cavern area.

Snowball Ravine is a snow-covered, mountainous landscape, so named because of the large snowballs that roll down the sides of the mountain. Littered across the ravine are snow mounds, which may be cut by the Links, or melted with the Fire Gloves obtained in the Level. The mounds may contain Hearts, Rupees, or enemies such as Rats. The giant snowballs can likewise also be melted away with the Fire Gloves. Similarly, there are gigantic frozen boulders as well that roll down the ravine, however these cannot be melted. The Level also features icy walkways over bottomless pits that provide little traction, making the Cozy Parka helpful in this Level.

In Stage 1, the Links begin at a small area leading up to several frozen stairways. Giant, frozen boulders will occasionally roll down these stairs. The Links can find a Boomerang and a pair of Fire Gloves further up the stairs. Another set of stairs to the east leads to the Triforce Gateway. Giant snowballs and frozen boulders will roll down these stairs as well, but the former can be melted away with the Fire Gloves. At the top of the stairs are three ledges that the Links must cross by forming a Totem and throwing each other across. The Link who is left behind can be reunited with the others by throwing the Boomerang at him to carry him over. The Triforce Gateway is found at the end.

In Stage 2, the Links appear over a deep chasm. A pair of torches must be lit to activate a moving, ice bridge. The Links then walk across an icy walk way, and choose either the left or right paths by throwing themselves across. On the left side is a snowy ledge with two Switches, which lowers an obscuring platform in front of unlit torches. The Links must then light these torches using the Fire Gloves and the Boomerang to carry flames over. On the right side is an icy platform where Hardhat Beetles attempt to push them off. A Bomb Flower grows on this platform, which must be thrown to destroy a cracked block atop a tall torch. This requires that the Links quickly form a Totem to reach. Once destroyed, the top Link can then light the two torches with the Fire Gloves. Doing both tasks activates the Triforce Gateway and creates an ice bridge to it.

Stage 4 is where Freezlord is fought. Icicles can be melted prior to the fight for Hearts.

Canyons in The Legend of Zelda series
Community content is available under GNU Free Documentation License unless otherwise noted.
Advertisement