Zelda Wiki
Register
Don't have an account?
Sign In
Advertisement
in: Locations in Spirit Tracks, Dungeons, Temples,
and 2 more

This refers to the temple found in the Snow Realm of Hyrule in Spirit Tracks. For the temple in Termina from Majora's Mask, see Snowhead Temple. 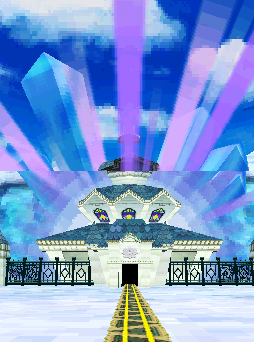 Snow Temple guide
at StrategyWiki
The Snow Temple is one of the temples explored in Spirit Tracks.[1] Many of the puzzles involve using the Boomerang to thaw and freeze objects and ring three bells in certain orders. The Whirlwind is used to transport Link around flooded portions of the dungeon before the Boomerang is received. Fraaz, a beast possessing the powers of both fire and ice, is the boss of the Snow Temple. After the dungeon is cleared, the Spirit Tracks connecting the Snow Realm to the Tower of Spirits are restored, causing the temple's energy to start flowing back into the tower once again.

The temple is located in the northwestern corner of the Snow Realm and is the second major dungeon in the game.

After clearing the Forest Temple, the duo return to the Tower of Spirits and recover the Rail Map of the Snow Realm, causing just enough of that realm's Spirit Tracks to reappear for them to reach the Anouki Village that is home to the Anouki tribe. After helping the Anouki pair up to defend their village against evil and locating the Snow Sanctuary to perform in a Lokomo Duet with the realm's guardian Lokomo, Steem, Link succeeds in restoring much of the realm's lost Spirit Tracks and reopens the path to the Snow Temple, now surrounded by mysterious blizzards due to the evil that has taken root there. After consulting a photographer named Ferrus, Link learns that the only path open to the Snow Temple through the blizzards is the path that the temple's energy usually follows to reach the Tower of Spirits and learns this path from Ferrus. Charting a course for the temple using this path, Link succeeds in reaching the blizzard-besieged temple and enters to discover the cause of its energy loss.

Within the temple, the hero is faced with multiple enemies based around the elements of cold and some even of a hot nature. Many of the temple's puzzles and traps are related to the manipulation of ice and flames, especially the strange icy fire that can be manipulated alongside normal flames with the temple's main treasure, the Boomerang. Eventually Link is able to reach the chamber of the temple's energy beacon, and finds the Force Gem that is the source of the temple's power missing. He is then faced with the Force Gem's thief, the Master of Icy Fire known as Fraaz, a strange beast with the power to manipulate ice and fire alike. The hero engages the beast in a complex battle but ultimately prevails against it, destroying Fraaz and reclaiming the temple's lost Force Gem. Restoring the Force Gem to the temple's energy beacon reactivates the flow of energy through the realm's Spirit Tracks, fully restoring the tracks that connect the temple to the Tower of Spirits and completing his quest to restore the temple to order.

The Snow Temple is designed with puzzles that largely reflect its name, centering around the manipulation of things such as ice and snow. Many puzzles involve the manipulation of fire and icy fire that has the power to freeze things it touches. There are also several puzzles involving the manipulation of blocks throughout the temple, such as for instance Link's use of a block as a flotation device in conjunction with his Whirlwind to explore some of the water-filled chambers of the temple. Another signature puzzle of the temple involves three bells that must be restored to the main chamber and struck in the correct order using the Boomerang in order to proceed deeper into the temple and reach the boss chamber.