"Boots designed for hiking up snowy mountains. They evenly distribute your body weight so you can maintain your normal movement speed on deep snow."
— In-game description

The Snow Boots are an item from The Legend of Zelda: Breath of the Wild. It is a leg armor allowing Link to maintain normal movement speed in deep snow.

This item was named Snowbreaker Boots in early builds of the game.

"Bozai was kind enough to lend you these boots. They evenly distribute your body weight so you can maintain your normal movement speed on deep snow."
— "The Eight Heroine" description

During the side quest "The Eighth Heroine", Bozai lets Link borrow his Snow Boots to make traveling through the snow in the Gerudo Highlands during his search for the Statue of the Eighth Heroine easier. After taking the statue's picture for Bozai and showing it to him, he will request Link return the Snow Boots after he rewards Link with the Sand Boots he promised as the Snow Boots are his only other pair of boots. As Link is borrowing them during the quest they cannot be sold, upgraded via Great Fairy, nor can they be dyed at the Kochi Dye Shop, and have a slightly different description.

After completing the "From the Ground Up" side-quest, Link can purchase them from the Rare Armor Shop in Tarrey Town for 800 Rupees.

Snow boots offer average defense. Despite being designed for use in cold weather, they do not increase resistance to cold temperatures. Link can still face the coldest temperatures in Hyrule wearing snow boots as long as he also wears warm head and body wear.

Interestingly, if worn with the Gerudo Veil and Gerudo Top the Gerudo in Gerudo Town, Bozai, and other characters effected by Link's "vai" disguise will still consider Link a Hylian female, thus they along with Sand Boots and Gerudo Sirwal, are the only leg armor options that can be worn with the Gerudo Veil and Gerudo Top as part of Link's "vai" disguise. It is implied that the Snow Boots wear created by the same Gerudo craftswoman that made the Sand Boots, thus they are a type of Gerudo clothing that can be worn by both "voe" (men) and "vai", thus wearing them maintains Link's vai disguise. Additionally it should be noted that Link can only take Bozai's Side Quests while disguised as a vai, as they were the result of Bozai's attempts to get closer to Link, whom he believes to be a Hylian vai. Presumably Link's disguise being maintained while wearing them is to allow Link to maintain the disguise due to the disguise being an important part of Bozai's side quests and it effecting other characters is simply a bonus.

After completing the side quest "The Forgotten Sword", it can be enhanced by the Great Fairies. 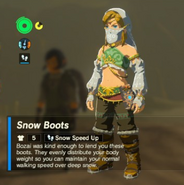 Link wearing the borrowed Snow Boots in the inventory screen

Retrieved from "https://zelda.fandom.com/wiki/Snow_Boots?oldid=533333"
Community content is available under CC-BY-SA unless otherwise noted.