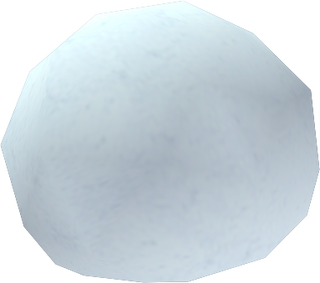 A mound of snow in Majora's Mask

Snowball
Snow Wall
Ice
Sand
Snow is a recurring aspect of environments in The Legend of Zelda series.[name reference needed] Usually found alongside ice in wintry areas, snow is often an interactive element of Link's surroundings, usually serving as a barrier or a hindrance. Gentle snowfalls may serve to set the theme for icy areas, just as fierce blizzards may become an adversary to be reckoned with.

Snow as a theme

Most commonly, snow is not something Link can interact with. It is merely part of the surroundings and serves to give an area a wintry look. This kind of snow is essential to areas such as Frozen Hyrule, Snowhead, and most notably the entire Snow Realm, which are characterized by their snowy terrain (which, in some titles, leave tracks and make crunching sounds when tread on) and snowfalls (be it a gentle flurry or a powerful blizzard). Even some enemies in the Legend of Zelda universe appear to be made entirely of animated snow (or at least based on snow). Such enemies are usually found in the aforementioned snowy/icy areas. Snow-themed areas and enemies are listed in their entirety in galleries of their respective sections further down.

In some areas, snow themes may be temporary. For example, a blizzard will blow out of Zora's Domain in Ocarina of Time until Morpha of the Water Temple is defeated. In Majora's Mask, spring will come to Snowhead once Goht of Snowhead Temple has been defeated, thus causing the snow to begin to melt. The dark clouds above Snowhead also disappear; the flurries of snow abate.

Snow as a gameplay element

On top of being part of the surroundings, snow may be an element of the environment that Link must interact with on his adventures. In this case, snow may serve as a hindrance, such as in Twilight Princess where Link may find himself trudging through deep snow. In Majora's Mask, snow may appear in large balls or mounds which serve as barriers to be destroyed by Bombs, a Goron Punch or Goron Link's "rolling spikes".[1] On his quest, Link must locate the Goron Elder, who will in fact be encased in ice under an aforementioned mound of snow. Rolling snowballs, which may gain in size as they roll and gather up snow, must be avoided by Link to avoid a collision. Snowballs also appear in Frozen Hyrule in Four Swords Adventures. These snowballs seem to have a mind of their own, as they will only start rolling once Link is in range, and will roll in whichever direction Link is moving. They can be melted using the Fire Rod. When melted, snowballs may yield items such as Keys or Force Gems. In Frozen Hyrule, Link will also come across Snow Walls, large barriers that can also be melted with the Fire Rod. Fierce blizzards mark some areas of Frozen Hyrule.[2] If Link remains unsheltered from the blizzard too long, his energy will fade and he will be sent back to the entrance of the area.[3]

Snow also appears in Oracle of Seasons in the Winter Season in small mounds serving as obstacles that can be cleared with the Shovel.[4] In fact, Link obtains the shovel by speaking to Holly, who will give him the shovel to clear the snow from her walkway and allows him to keep it afterwards.[5] In order to reach the Snake's Remains dungeon, Link must clear the snow in the Woods of Winter. Snow can be found anywhere in Holodrum in the winter, especially on Goron Mountain where the season is unchangeably winter. The Witch's Hut located in Sunken City can only be reached in winter, where the snow creates a slope leading to the otherwise inaccessible rise where the hut is located.

Weather in The Legend of Zelda series
Community content is available under GNU Free Documentation License unless otherwise noted.
Advertisement