Zelda Wiki
Register
Don't have an account?
Sign In
Advertisement
in: Shops, Locations, Locations in Hyrule Warriors,
and 2 more 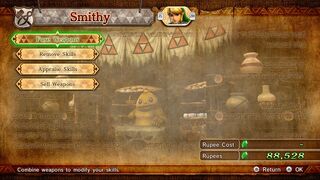 The Smithy is a store in the Bazaar in Hyrule Warriors. It is where Skills may be transferred between a Warrior's Weapons, and where Weapons may be sold. It becomes available once "The Sorceress of the Woods" has been cleared.[1]

To transfer a Skill, a Warrior must have two Weapons of the same category and the appropriate amount of Rupees, which are determined by the source Weapon and by the type of skills being transferred. Weapons with empty Slots are permitted to serve as source Weapons, though both Weapons will be destroyed in the transfer process to create a stronger Weapon. Weapon Skills cannot be transferred if they are a Sealed Skill, requiring the Warrior to defeat the necessary amount of enemies before being able to transfer the Sealed Skill. Skills cannot be transferred between Weapons of different categories.[2]

In addition to fusion, unlocked Skills may be removed from a Weapon.[3] All Skills will cost a base price of 300,000 to remove.

Weapons may also be sold at the Smithy, with their price varying based on the Skills and Stars that the Weapon has. Sealed Skills and empty Skill slots do not contribute to the value of a Weapon.[5]

The equation for the cost of a Weapons is dependent upon Weapon tier, number of Stars (between 0 to 5) and the value of a given Skill. The formulas for these are: