Zelda Wiki
Register
Don't have an account?
Sign In
Advertisement
in: Enemies, Common Enemies and Traps, Slime-based Enemies,
and 4 more 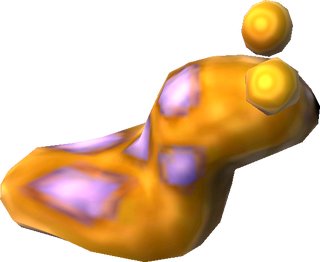 Any
Sluggula are recurring Enemies in The Legend of Zelda series.[1]

Sluggula in A Link to the Past appear in Misery Mire, usually in small groups. They have the ability to lay green Bombs that can damage anything nearby, and will usually drop a large number of these while squirming around the room. As such, they are invulnerable to explosives, so will not be harmed by their own Bombs; however, they are relatively weak and can be dispatched with most other weapons.

Sluggula in The Minish Cap appear as normal slugs. They are Minish-sized, and only appear in Minish-sized Dungeons and Caves. They move slowly across the floor, leaving a trail of slime as they do so. Some wait on the ceiling for Link to approach their vicinity, dropping down unexpectedly to deal damage. This attack is telegraphed by the shadow of the falling Sluggula on the floor. After falling, they remain on their backs for a short time, exposing a more vulnerable underbelly that will allow Link to dispatch them in a single strike from the Sword.