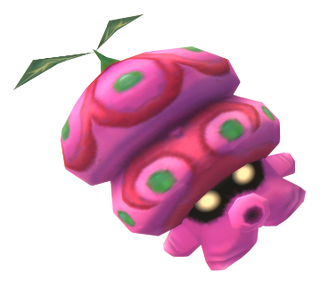 Breath of the Wild
8

Bow
Sky Octoroks are recurring Enemies in The Legend of Zelda series.[1][2]

Sky Octoroks only appear in the Sky in Skyward Sword. They fly using the leaves on their mantles and live on the small, barren rock islands scattered throughout the Sky. As Link flies his Loftwing, Sky Octoroks will fire homing rocks at him. They can be defeated by flying close and boosting through them with a Spiral Charge.

Sky Octoroks only appear in Master Mode included in DLC Pack 1, The Master Trials, in Breath of the Wild. They can be found all around Hyrule soaring through the skies next to bridges and Sheikah Towers, or above bodies of water. Sky Octoroks appear in groups of three or four holding planks containing Treasure Chests, and enemies.[3] They ascend when they hear a Bokoblin Horn or Link whistling.[4] Sky Octoroks can be defeated with a single Arrow, dropping the contents of their planks when defeated. They are harmless to Link as they cannot attack like other Octoroks. Unlike other enemies, Sky Octoroks do not need the Blood Moon to respawn and do not drop Materials when defeated.

Sky Octoroks reappear in Hyrule Warriors: Age of Calamity primarily seen in the Divine Beast missions, carrying monsters just like in Breath of the Wild. During the EX Scenarios from the DLC pack Pulse of the Ancients, they carry Black Moblins and Silver Moblins while also spitting rocks for the first time since Skyward Sword, though it can be countered with the Stasis Rune of the Shiekah Slate. They can also be signaled to fire bombs and even Royal Broadswords, the latter of which can be reflected with Magnesis.