Sanctuary
City in the Sky

Shoots Link between the City in the Sky and Lake Hylia

"Hey, buddy! So... Uh, is that yours? Heh heh... Hey, buddy, I never thought you'd get so hooked on fantastication that you'd try to build your own cannon! So... are you gonna give me the tour or what? Looks like you have a serious rig over there..."
— Fyer

Interestingly, miniature Sky Cannons can be found in the Oocca Shop.

It is possible that the Groosenator, the catapult that Groose made in The Legend of Zelda: Skyward Sword, is related to the Sky Cannon. The Sky cannon could possibly be an improved version of the Groosenator, as both can send the user into the sky. It is possible that inhabitants of Skyloft could have used this to return from the ground, as Loftwings cannot fly below the Cloud Barrier. After many years, both worlds lost connection, probably caused by the Sky Cannon on the ground deteriorating; this lost connection could also be a factor in the theory of Skyloft inhabitants evolving into the Oocca. 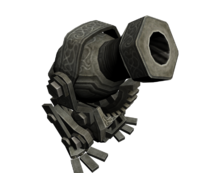 A Sky Cannon appears during one attack of Twili Midna's Mirror move-set and is summoned to fire at enemies.

Retrieved from "https://zelda.fandom.com/wiki/Sky_Cannon?oldid=527534"
Community content is available under CC-BY-SA unless otherwise noted.