Zelda Wiki
Register
Don't have an account?
Sign In
Advertisement
in: Sky, Locations, Locations in Skyward Sword,
and 2 more 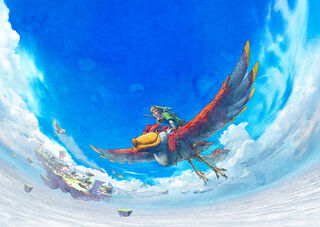 The Sky is a recurring location in The Legend of Zelda series.[citation needed][2] where Skyloft and many other floating islands are located in Skyward Sword. It is also where the game indirectly begins.

Before the events of Skyward Sword, a large horde of monsters led by Demise appeared from beneath the ground of The Surface world, and began leading a massacre against the people of the surface. The monsters wanted only one thing, the ultimate power given to Hylia by the gods of old.[3] To prevent the great power from falling into the hands of the demonic creatures, Her Grace gathered all the remaining humans on a plot of land and brought it up skyward.[4] Centuries later, the civilization living above the clouds is living a peaceful life, with the protection of the Statue of the Goddess depicting Hylia, presiding over them. The Statue of the Goddess was built so that Hylia, could keep the Goddess Sword, Fi, and the Triforce hidden away from the mortals, and to keep them safe for the chosen hero of the goddess.[5]

The technology of the region has also greatly advanced since Skyloft was risen into the heavens, even surpassing The Surface's technology, with windmills that have the power to raise the sacred Light Tower, Beedle's flying Air Shop, and various lighting and furnishing.[6] However, the people living there are known for their way to travel around the different Islands of The Sky, on large shoebill-like birds called Loftwings.[7] Having a Loftwing is what separates children from adults in this little society.[8]

There are numerous islands in which Link is able to travel to with the help of his Loftwing, earning treasures and Heart Containers after locating the corresponding Goddess Cube from the surface. Also located in the sky is the Thunderhead, where the great spirit of the skies, Levias, resides, as well as the main location of the Isle of Songs.

Goddess Cubes are mysterious cubes spread onto the world by the Goddess Hylia in order to assist her chosen hero.[9][10] When Link uses the Skyward Strike on these cubes, it disappears from The Surface and beams into the sky, unlocking a Goddess Cube Chest.[11][12]

A distinctive aspect of Skyward Sword is the lack of roads connecting in-game areas. The developers designed the different areas to possess distinctive gameplay styles and mechanics, which made developing roads between different areas difficult. The developers eventually decided not to include roads, since if they could make the gameplay in each area sufficiently dense then they wouldn't have to physically join them. They initially attempted to do this using a course selection similar to that of the Super Mario Galaxy games, but they couldn't do it the exact same way and settled on the idea of a sky where Link would dive to the land below. According to the developers, after using the idea for some time in development, the pieces naturally fell together. The transportation, for instance, felt the most natural with a bird.[13]

In Cadence of Hyrule, Cadence falls from the Sky when she is teleported to Kingdom of Hyrule.