Zelda Wiki
Register
Don't have an account?
Sign In
Advertisement
in: Enemies, Common Enemies and Traps, Arthropod Enemies,
and 14 more 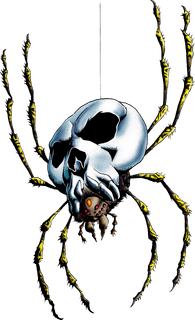 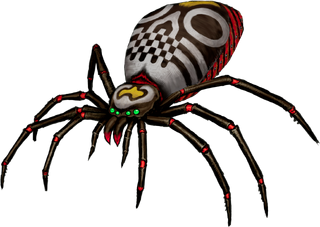 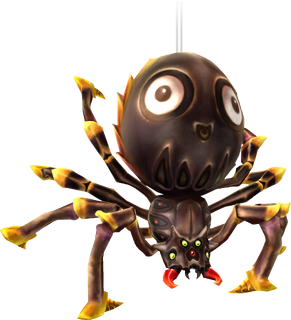 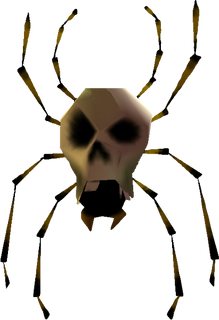 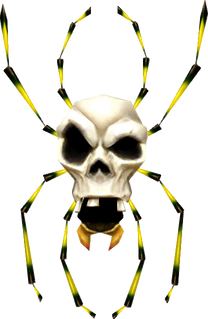 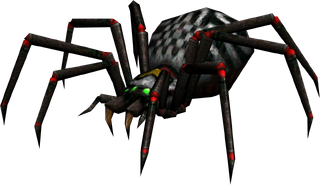 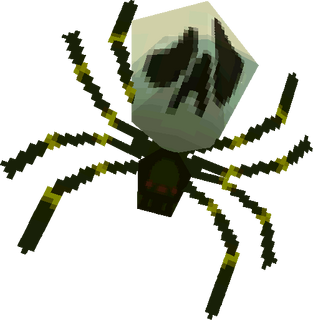 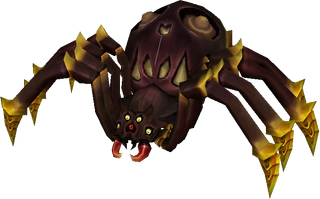 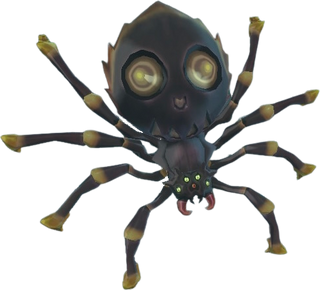 Skulltulas are recurring Enemies in The Legend of Zelda series.[2][3][4][name reference needed]

Although the Skulltula's specific appearance varies from game to game, it is always depicted as a large spider with a skull-like abdomen. In Ocarina of Time and Majora's Mask, these foes hang from the ceiling and surprise Link by dropping down and attacking him. If Link comes too close to them, they will spin around quickly, injuring him and tossing him backwards. Their hard, skull-shaped exoskeletons can deflect many attacks. They are however far from intelligent, and often leave their defenses open by exposing their soft underbellies when they briefly turn. The Bow can also pierce its armor instantly with an Arrow. A Hookshot can also be used to pierce their defenses, however it loses its efficiency in Majora's Mask. They are occasionally also invisible, and require the use of the Lens of Truth to be seen.

Twilight Princess incorporates larger Skulltulas that can crawl across the landscape, fighting Link one-to-one instead of keeping to their webs like in previous incarnations. White and orange varieties appear, with the orange kind only appearing in the Forest Temple. They are somewhat more intelligent than their previous incarnations, as they will actively block Link's frontal attacks and do not expose their underbellies. Link however can counterattack it when it rears back to attack; Link can slash back or dodge its bite attack and hit it while it recovers. Other strategies, such as using a Spin Attack followed by an Ending Blow, using a Shield Attack to knock the arachnid off balance, or use a Back Slice to circumvent its defenses entirely while attacking its abdomen, are also efficient.

Akin to the Ocarina of Time incarnation, the species seen in Phantom Hourglass and Spirit Tracks like to hang from a single strand of webbing, only after ambushing intruders. Other than that, these creatures do not have much offensive strategy. In the former, the spiders exist exclusively in dungeons, and in the latter, Link can encounter them only deep in the expanses of the Forest Realm while riding the Spirit Train. Only in Spirit Tracks do Skulltulas come in standardized colors: the rudimentary white form can be simply destroyed with one hit, while the stronger red version takes a couple strikes to dispel.

The variants seen in Skyward Sword will jump and hold onto Link if he is nearby and proceed to bite him until he breaks free. They also will constrict Link with silk shot from their mouths. While they are grounded, Link can swing upwards to flip them on their back. This exposes their underbelly, where they have a round, purple spot that Link can stab. They are often found clinging to webs or hanging on threads, which the Beetle can easily cut away, causing them to fall to the ground.

A special type of Skulltula that appears in Ocarina of Time and Majora's Mask is the Gold Skulltula, which drop Gold Skulltula Tokens when defeated that can be traded for useful items. In Ocarina of Time, Link collects the Tokens to free a family from a curse. Once freed, the family will reward Link if he visits them in the House of Skulltula in Kakariko Village. In Majora's Mask, they can be found in both the Swamp Spider House and the Oceanside Spider House, which Link can also defeat to collect their Tokens for awards. They also appear in Hyrule Warriors, where they drop Illustration Pieces instead.

A smaller version of the Skulltula, the Walltula, also exists. It usually clings to vines that Link must climb, and charges at him if it spots him. To advance, Link can either sneak past while their back is turned, or defeat them with any ranged weapon.

In Link's Crossbow Training, Skulltulas appear in the "Skulltula Forest: Ranger" Stage. They crawl on walls and hang on tree branches. Skulltulas attempt to attack Link when close by and can be taken out with two shots of the Crossbow, or one shot with an Exploding Arrow.

A Skulltula has a brief appearance in The Legend of Zelda: Ocarina of Time (Himekawa), crawling on a wall of the Forest Temple while Link and Mido are exploring it.

Skulltulas appear as enemies in Battle Quest of Nintendo Land, first appearing in Level 4: Road to the Goron Mines. They act the same way as in Skyward Sword, and can be freely slain on their underbellies, since they do not have their crystal weak points. If they latch onto a player, that player will only have 6 seconds to shake them off until they take damage.

Skulltulas appear as a Trophy in Super Smash Bros. for Nintendo 3DS.

Skulltulas appear as enemies in Cadence of Hyrule.

Skulltula is a portmanteau of "skull" and "tarantula."