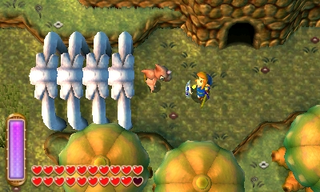 The Skull Woods Region is a location in the northwest corner of Lorule in A Link Between Worlds.

The Skull Woods comprises the majority of the Skull Woods Region and is what the region is named after. It is the counterpart of the Lost Woods in Hyrule and Skeleton Forest in the Dark World and it contains the dungeon of the same name. Its southern border has three exits, where the eastern one of these leads to the wooded area that connects to the vicinity whose Hyrule counterpart contains the Fortune Teller's shack, while the western & central exits at the southern border lead to the wooded area north of the isolated northern part of Thieves' Town. Its eastern border has one exit that connects it to the area directly west of Death Mountain where the dilapidated shack is located. The Skull Woods can be traversed using two different paths; one that connects the western entrance on its southern border to the entrance on its eastern border, where two Maiamais can be found, and a shorter one that connects the central and eastern entrances on its southern border.

As Link enters the Skull Woods, he quickly encounters Hyus that haunt it along with several skulls and rib cages of giant beasts that had fallen in Lorule's past, as Princess Hilda warned.[1] Further exploration reveals multiple entrances to the Skull Woods dungeon, which is very similar to the dungeon's Dark World counterpart and its multiple connections to the Skeleton Forest in A Link to the Past. The dungeon is a subterranean one and its segmented parts are located under the entire span of the Skull Woods. Link also finds a cave that is a refuge to the lost Mysterious Man in the northern part of the woods. While taking the western entrance on the woods' southern border and heading north and east on the path, Link finds and rescues a lost Maiamai under some tall grass east of the pillar in the Skull Woods and second Maiamai under the skull in the northwest corner of the woods after traveling west from the Mysterious Man's cave.

The Skull Woods itself contains a total of two lost Maiamais. While it contains no direct items, Link can buy a Golden Bee from the Mysterious Man for 888 Rupees, which he can then take to the Bee Guy in Kakariko Village to obtain the Bee Badge. There are also rewards that can be found, such as a chest with a Purple Rupee and the painting of Seres in an isolated part of the Skull Woods that Link can only get to by defeating Knucklemaster in the Skull Woods dungeon.

As Link makes his way out of the Skull Woods from the central exit on its southern border, he notices it's blocked by a big rock that he is unable to move unless he has Titan's Mitt. As he removes the rock, Link finds and rescues a Maiamai that was trapped under it.

After clearing the rock and going south, Link arrives to the isolated northern part of Thieves' Town where he finds a parallel path on the west side of town that leads to the western entrance on the Skull Woods' southern border. This is where the paths to the western & central entrances on the Skull Woods' southern border converge. In this isolated part of Thieves' Town, Link finds the doorless Lorule equivalent of Sahasrahla's House. Link wall merges to get around the chasm that separates the northern part of Thieves' Town from the rest of the village that would normally prevents anyone from even getting to the front of the building. He arrives in the middle of the building's front side and acquires a Piece of Heart. While wall merging again to return to the north side of the house, Link rescues a Maiamai stuck on its west wall.

In the area north of Thieves' Town, Link proceeds east to the canyon-like area with the pit containing a Taros and the chasm that separates the Skull Woods Region from the Graveyard. Link finds a Maiamai stuck on the wall in the pit that he rescues after defeating the Taros in it.

Link defeats the multiple Ropas and Taroses that infest this area and proceeds north to the wooded area containing trees in a V-formation located between the Skull Woods and Lorule's Death Mountain. As Link cuts down the bushes between the two middle trees in the V-formation, he finds and rescues a lost Maiamai.

Continuing north from this wooded area takes him to the dead end where the dilapidated shack is located where he also finds the entrance to Skull Woods that is located on the woods' eastern border. Immediately upon entering this area, Link finds and rescues a Maiamai stuck on the eastern rock wall. He also acquires a Piece of Heart on top of the dilapidated shack by hovering there with the Cucco on the nearby ledge.

The only items located in the other areas of the Skull Woods Region are the two Pieces of Heart.

The other areas of the Skull Woods Region contain a total of six lost Maiamai and the two Pieces of Heart are the only items located there.

There are two fissures that link the two worlds located in the other areas of the Skull Woods Region. One is on the back side of Lorule's counterpart of Sahasrahla's House in the isolated northern part of Thieves' Town and the other is inside the dilapidated shack west of the Skull Woods.