Not to be confused with Skeleton Forest, or Skull Dungeon from Oracle of Ages. 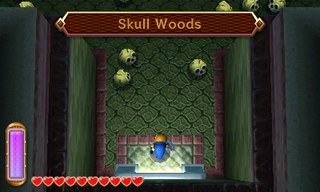 A Link to the Past
Crystal
Heart Container

Skull Woods guide
at StrategyWiki
A Link Between Worlds

The Skull Woods,[1] also known as the Level 3,[2] is a recurring Dungeon in The Legend of Zelda series.[note 1]

Entrance to the Skull Woods

Unlike other dungeons, Skull Woods has a vast number of entrances throughout the forest, hidden within large, gaping skulls. It is also possible to enter the dungeon by dropping through pits in the forest floor. The dungeon sprawls under almost the entirety of the Skeleton Forest. The number of entrances to this dungeon, a total of eight in all, as well as the disconnected sections of the dungeon, makes it entirely unique among Zelda dungeons. The variety of entrances make for a labyrinthine layout, which can get very disorienting. The dungeon also makes heavy use of Star Tiles, which rearrange the layout of the pitfalls found on the floors throughout the dungeon.

While Link can enter almost any entrance first, the section of the dungeon that leads to the boss is cut off from the rest of the dungeon, similar to the Desert Palace. To reach the Dungeon Master, Link must enter a huge insect-like skull near the resting place of the Master Sword in the Light World. To enter this part of the dungeon, Link will first have to obtain the Fire Rod, then locate the correct exit to reach this final section.

Despite being called “Level 3”, you can beat 4 other dungeons before even entering. Those dungeons being Palace of Darkness, Swamp Palace, Thieves’ Town, and Misery Mire.

The dungeon introduces the powerful Gibdos to the game, which are weak to fire but take many sword hits to kill. It also features the notorious Wallmaster, who for the first time in the series drops from the ceiling, dragging Link back to where he entered the dungeon. To reach the Fire Rod, Link will have to destroy an entire wall to reach the Big Chest, which is otherwise inaccessible. The Fire Rod is vital in the dungeon, able to destroy the immensely resilient Gibdos (as well as Wallmasters) in one hit, and is required to light torches from a distance so Link can reach the Dungeon Master, Mothula. Mothula is also unique among bosses in the game, as the room itself is more of an enemy than it is, with a moving floor and unpredictable Traps lining the arena. After defeating it, Link will receive a Heart Container and the third Crystal.

Entrance to the Skull Woods

Skull Woods is in the Skull Woods Region of Lorule, directly above the Thieves' Town. The temple can be accessed through the southeastern entrance to the woods.

The Skull Woods is a set of haunted catacombs beneath the forest which features numerous entrances and exits, including some that are merely hidden pits in the earth above. The dungeon is infested with Wallmasters, with several puzzles that require Link to actually exploit the Wallmasters' instincts by tricking them into pouncing on switches or crumbling floors. The dungeon also introduces a new type of switch, activated by placing crystal eyes into statues.

Just like in the dungeon of the same name from A Link to the Past, the Skull Woods dungeon requires Link to find various exits back into the forest, so that he can find a different entrance to proceed with the dungeon.

The Master Ore chest can be found on a ledge in the northwestern room of the first floor (same room as the Big Key, just on the opposite end). To access it, Link must fall through a hidden hole in the Skull Woods area and land on the southeastern ledge of the correct room. He can then Wall Merge to get to the ledge that the chest is on.