Skull Kids (スタルキッド, Stalkid?) are a recurring race in the Legend of Zelda series. They are a race of diminutive, mischievous beings that reside in forests. When non-fairy folk get lost in Lost Woods, they are cursed to become Stalfos—but Navi suggests that when children get lost in the woods, they may become Skull Kids. While Skull Kids tend to be friendly toward children, they fear adults and will attack them on sight.

Skull Kids can be found in the Lost Woods, where they play flute-like instruments. Their faces are entirely black, with glowing orange eyes and large lips. While Link is a child, he can interact with them; however, they become hostile once Link is an adult, firing small projectiles at him through their instruments while circling around Link. This is the only time within the game when the Skull Kids will leave their stumps. Link can kill these hostile Skull Kids, most notably with the Biggoron's Sword or the Giant's Knife due to the substantial reach these provide. Doing so earns Link a huge Rupee worth 200 Rupees. 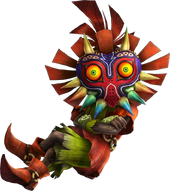 Skull Kids slightly resemble Imp Poes, with their small shape, mischievously violent nature, and (in Twilight Princess) lanterns. This could mean that Skull Kids are Imp Poes' living counterparts. Interestingly, the Happy Mask Salesman and number of other characters refer to the Skull Kid from Majora's Mask as an imp. Of course this could be simply because of his small stature.

The Kokiri and Skull Kids are opposites, as one are children from the Lost Woods and the Kokiri are children from the Kokiri Forest protected by the Deku Tree. It could be possible that Kokiri are Hylian children who got lost in the woods around the Great Deku Tree and given guardian fairies to protect them from being cursed and SkullKids are Hylian children who got lost and cursed in the Lost Woods, as the Deku Tree is not around leaving their spirits to be cursed, meaning Kokiri and Skull Kids are variations of eachother. It is possible the fairies the Kokiri have protect them from the Lost Woods curse.

Render of a Skull Kid Portrait found in the Oceanside Spider House from Majora's Mask 3D
Add a photo to this gallery
Retrieved from "https://zelda.fandom.com/wiki/Skull_Kid_(race)?oldid=536662"
Community content is available under CC-BY-SA unless otherwise noted.