This article is about the mini-boss from Twilight Princess. For the recurring character from Ocarina of Time and Majora's Mask, see Skull Kid.

Master Sword (Via showing the way to the Sacred Grove)

The Skull Kid is a mini-boss from The Legend of Zelda: Twilight Princess. He is a member of the Skull Kid race, although he has many physical attributes that differ from Skull Kids appearing in earlier games. He is encountered on two occasions, and although he never directly attacks Link, he does summon Puppets to do his bidding for him.

The Skull Kid is first encountered in the Sacred Grove, where he leads Link to the resting place of the Master Sword. Instead of acting purely as a guide, however, the Skull Kid plays a game of Hide-and-Seek with Link as they travel. In order to advance, Link must seek out the Skull Kid by following the light of his lantern, and listening to "Saria's Song", which he is playing on his horn; the louder the sound becomes, the nearer Link is to the Skull Kid. Link must find him several times and attack him before he leads him to the Master Sword, battling Puppets the Skull Kid summons along the way.

When Link returns to the Sacred Grove later in the game to find the Temple of Time, the Skull Kid will help him navigate the area once again. Once again, he plays the dangerous game of Hide-and-Seek, but the going gets more difficult this time, as he hides himself in more out-of-the-way places and must be hit using projectiles such as arrows. At the end of their second game, the Skull Kid invites Link to return and play again sometime, implying that he is not actually hostile towards Link, but rather only seeking someone to play with.

Upon further visits to the Sacred Grove, the Skull Kid is not seen; however, if Link is careful, he may notice the flickering lights of a lantern inside one of the caves before he enters it. Once he attempts to investigate further, however, the light quickly disappears. This seems to hint that Skull Kid is still in the woods; however, with his purpose fulfilled, he now only takes delight in playing tricks on Link, similar to Skull Kids in earlier games. Also, if Link rolls into certain trees within the forest, Puppets like the ones summoned by the Skull Kid will drop down and move in to attack him, presumably another result of his trickery.

The Skull Kid appears as an enemy target in Sacred Grove: Defender. If the Skull Kid is shot while he shimmers green, then Link receives 100 automatic shots.

While the Era of Twilight version of Skull Kid does not appear, his Puppets and the horn he uses to summon them appears as part of Majora/Skull Kid's Ocarina moveset. He can summon the puppets as part of his Strong Attack (which will cause the Puppets to attack enemies alongside Majora/Skull Kid, Tatl, and Tael) and his standard Weak Point Smash.

It is unknown how this lone Skull Kid came to survive. Considering other forest-dwelling races like the Kokiri and Deku have disappeared over the course of time leading to Twilight Princess. It's possible that either the Skull Kid race somehow survived or that he is one of few(or the last) of them remaining in Hyrule. It is also possible that the other races moved out of the forest while the Skull Kid race chose to remain there. Another theory could be that, due to his dark, haunting behavior, his Poe-like lantern and ability to disappear and teleport around the Sacred Grove, he is a ghost of a Skull Kid. One of the stories read to Link by Anju's Grandmother in Majora's Mask also implies that the Skull Kid had been friends with the Four Giants long before they entered their sleep, which is an idea that the Skull Kid's dialogue after the battle with Majora is concluded supports. If this is the case, it's plausible that he managed to survive the extensive length of time between the two games, or that Skull Kids are either extremely long lived. Another possibility is that Skull Kids are in-fact an undead race like the Stalfos and Stalchildren, as they are called the Stal Kids in Japanese versions of the franchise. It should also be noted that Skull Kids are already known to possess the ability to vanish if attacked in Ocarina of Time, which may actually be the result of teleportation.

If the above is true, it's possible this Skull Kid was installed as a guardian or caretaker of the Sacred Grove and Master Sword. The fact that he was allowed to stay in an area that is otherwise uninhabited, and which is considered sacred, supports this idea, as does the fact that Link might never found the Master Sword or the Temple of Time without his assistance. As he was a friend of the Hero of Time, he may have chose to protect the area in honor of his friend who had pasted away before the events of Twilight Princess. 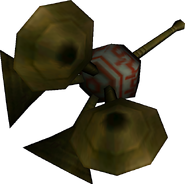 Skull Kid's Trumpet
Add a photo to this gallery
Retrieved from "https://zelda.fandom.com/wiki/Skull_Kid_(mini-boss)?oldid=542344"
Community content is available under CC-BY-SA unless otherwise noted.