"In three days' time, the moon will fall and destroy the land of Termina. At least, it will if Skull Kid has any say in the matter. Thankfully, Young Link put an end to that. Skull Kid is a mischievous little imp who inherited fearsome powers after stealing Majora's Mask. Despite causing widespread destruction and chaos, he is actually very protective of his friends. Equipped with an ocarina, a trumpet, his companions, Tatl and Tael, and of course the terrifying power of Majora's Mask itself, Skull Kid is a serious threat to anyone around him."
— Skull Kid, Majora's Puppet Historical Entry Tutorial Bio

Skull Kid is a mischievous soul who has a habit for causing trouble. Despite the mischief he causes, he protective of his friends; however, due to Majora's corrupting influence, Skull Kid's mischievous nature is taken to the extreme and most of his positive traits are gone. As Majora's puppet, he is as dangerous and unpredictable as Majora itself.

After Linkle becomes lost in the forest while on her way to Hyrule Castle to aid the Hyrulean Forces, she encounters the masked Skull Kid. Stealing Linkle's Compass, Skull Kid leads her on a merry chase through Faron Woods, which leads to a confrontation between his forces and Linkle's army of Cuccos. Much like his Era of Twilight incarnation, he teleports between various keeps within Faron Woods, taunting Linkle and sending his minions to distract her; however, unbeknownst to Skull Kid, Linkle's Compass possesses a mysterious and powerful magic, which unleashes a blinding light that dazes him and allows Linkle to defeat him. Eventually, Majora regains control over Skull Kid and vows that he will return to take Linkle's Compass. Despite this, Linkle never encounters Skull Kid again, as presumably he either returned to his own time or ended up back in Termina. 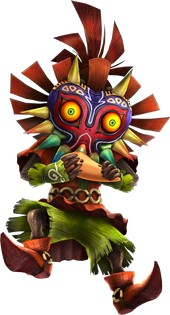 Skull Kid possesses many abilities possessed by members of the Skull Kid race, such as teleportation, musical skill, and a talent for causing mischief. Through the dark power of Majora's Mask, Skull Kid gains far greater powers such as levitation, dark magic, the ability to fire laser beams from the Mask's eyes, and the ability to summon the Moon. Using his Ocarina, Skull Kid can command Tatl and Tael to attack in tandem. In addition to Majora's Mask and his Ocarina, Skull Kid also carries his trumpet that he can use to summon Puppets like his incarnation from The Legend of Zelda: Twilight Princess.

When encountered as an enemy, Skull Kid briefly appears invisible save for Majora's Mask before coming into full view after Tatl and Tael fly toward him while moving his elbows and face around in an erratic manner, similar to his debut appearance in Majora's Mask. Shortly afterwards, he then proceeds to levitate and "recline" while having his "face" violently shake while releasing dark waves of magic, alluding to how he cursed Link into becoming a Deku Scrub in the beginning of the game. He then levitates upward as his name comes up.

In his victory animation, he blows into his ocarina a few times, laughing each time he makes a toot, alluding to his actions regarding the Ocarina of Time he stole from Link shortly before the latter regained consciousness in the opening of Majora's Mask. Afterwards, he then flew off.

Dark Skull Kid is a shadowy doppelgangers of Skull Kid that appear as enemies in Adventure Mode. They use the same moveset and drop the same Materials as Skull Kid. 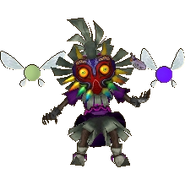 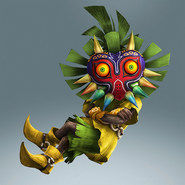 Retrieved from "https://zelda.fandom.com/wiki/Skull_Kid_(Hyrule_Warriors)?oldid=539975"
Community content is available under CC-BY-SA unless otherwise noted.