Zelda Wiki
Register
Don't have an account?
Sign In
Advertisement
in: Forests, Locations, Locations in A Link to the Past 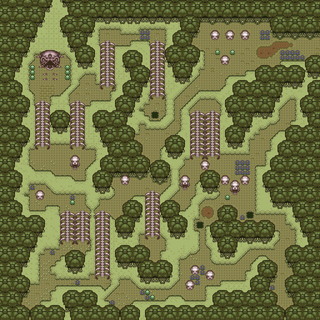 The Skeleton Forest is the Dark World counterpart to the Lost Woods in A Link to the Past.[1]

As the name suggests, the Skeleton Forest is decorated with passages made of bones, which allow Link to go from a segment of the forest to another. Beneath the Skeleton Forest lies the third dungeon of the Dark World, the Skull Woods, with several entrances between the two. A thief's hideout can also be found here.

A unique trait to the Skeleton Forest is that Link must find various entrances to Skull Woods within the woods to access different areas of the dungeon. The final entrance, which leads to the dungeon's boss, is located northwest (where the location of the Master Sword originally was in the Light World), but requires the dungeon's main item, the Fire Rod, to be opened.

Forests in The Legend of Zelda series
Community content is available under GNU Free Documentation License unless otherwise noted.
Advertisement